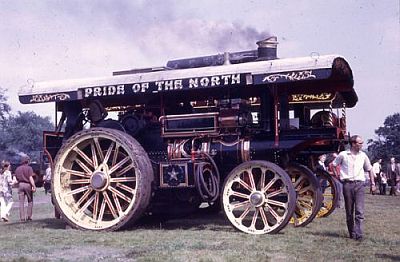 Scope: A collection of colour and black and white photographs consisting of traction engines, fairgrounds, ride and organs taken by Ron Newbold.

Administrative / biographical history: Ron Newbold was an enthusiast and supporter of the preservation scene and his collection reflects his interest and support of the 1970s rally scene.

Ron Newbold was born in the Warwickshire market town of Henley-in-Arden, and lived there for all of his 80 years. In the years immediately after WW2 he became a member of the Friendship Circle of Showland Fans, the very first fairground enthusiasts’ club, and was a keen supporter of the organisation’s events. He was later to play a similar part in the activities of the Fairground Society, founded in 1962 and from 1978, the Fairground Association of Great Britain.

His working life included spells with a local coach firm and the fairground ride manufacturers, Supercar of Warwick. He was able to combine his qualifications as a heavy goods vehicle driver with his hobby, driving loads at the weekend for Wilson’s Amusements of Redditch over very many years. On the first Sunday after the first of September he always drove one of the firm’s loads into the centre of Oxford for the celebrated St Giles Fair, an annual journey he made until ill health in his later years prevented him.

Source: Donated via Graham Downie
System of arrangement: Catalogued by type
Subjects: Fairgrounds, Fairground Rides, Fairground Art, Transport, Steam Preservation, Travelling Entertainment
Conditions of access: Items are available to view by appointment in the NFA reading room
Restrictions: None
Copyright: Copies may be supplied or produced at the discretion of National Fairground Archive, subject to copyright law and condition of the material
Finding aids: Photographs available on NFA Digital