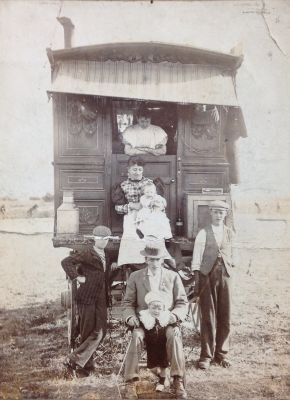 Scope: This collection contains black and white photographs of George Sanger's Circus, photocopies of newspaper cuttings related to the Sanger Family and original drawings for costume designs by June Dick.

Administrative / biographical history: This collection has been donated by June Dick, nee Holloway. It relates to one of the longest and most significant circus and variety lineages in the UK, including some of the greatest names in popular entertainment such as; Sanger, Coleman, Austin and Holloway. Over five generations of performers covering a wide spectrum of showmanship from equestrians to clowns, wire walkers, tumblers, showmen, agents and singers.

The donor’s ancestry traces back to Lord George Sanger (1827-1911), who remains one of the most iconic and significant British showmen to ever exist, and his wife Ellen Chapman (1832-1899), one of the first and most famous lion queens of all times, hailed as the first woman ever to put her head inside a lion’s mouth. George and Ellen had a son, who died as a baby, and two daughters; Laurina (1853-1882), June’s great grandmother, and Sarah Harriet (1854-1929).

Laurina ‘Topsy’ was a High School equestrienne in her father’s circus. She married Alexander Coleman (c.1850-1903), a multi-talented performer better known for his clown alter ego ‘Little Sandy’. Little Sandy was said to be the most famous clown of his day and Queen Victoria’s favourite. Laurina and Alexander had four children; Georgina (born 1873), Alexander (1876-1886), Ellen 'Topsy' (1878-1969), June’s grandmother, and George Sanger (1880-1957).

Ellen ‘Topsy’ Coleman, married Harry Austin (c.1872-1919), the eldest son of George and Emma Austin (1838-1900). Ellen and Harry were both equestrians, Ellen was a High School rider, while Harry was a trick rider, part of the ‘Brothers Austin’ troupe. Harry and Ellen stayed with Sanger Circus for many years and performed by Royal command at Balmoral in 1898.

Ellen and Harry had four children; Olive, Cissie (d.1977), June’s mother, Florence (Florrie) and a boy.
Although Cissie started as a knockabout comedy act, she eventually trained as a singer and pursued a career away from the circus, on the variety and music hall scene.

Cissie married George Holloway (b.1895), who came from a famous family of wire walkers and equestrians. George James Sebastian Holloway was the son of George Hugh Holloway and Belvina Bonfanti (b.1867), from the Quaglieni’s Grand Italian Cirque family.

Once they were married, Cissie and George performed a wire act together as 'Holloway and Austin', where Cissie mainly acted as George’s assistant.

Cissie and George had a daughter on 22 April 1928, June Holloway, but they divorced when she was only six months old. June was raised by her paternal grandparents, while her parents continued touring their acts around the UK and America. During WWII, Cissie worked for E.N.S.A. and travelled the country entertaining the troops, while George travelled a small family circus. By this point the family had already left the circus scene. Although George, continued doing circus acts in music hall and variety theatres.

June grew up in Brixton Hill and stayed with her grandparents George and Belvina until they died. She was trained in tap dancing, ballet, piano, and as a classical singer. June, however, didn’t have an interest in becoming a professional performer and she trained as a fashion designer. June designed costumes for pantomime, shows on ice and variety amongst others.

June married three times, her first husband was Michael Sullivan the famous theatrical agent who discovered Shirley Bassey. June and Michael however divorced and June re-married an antiques dealer. After his death, she married her last husband, a theatre impresario, with whom she leased the Royalty Theatre in Kingsway, London. They put together the hit show ‘Bubbling Brown Sugar’ in the late 1970s and held Sunday concerts and concerts in the park with international performers. They ran the theatre until the business became too much for them and they gave it up.