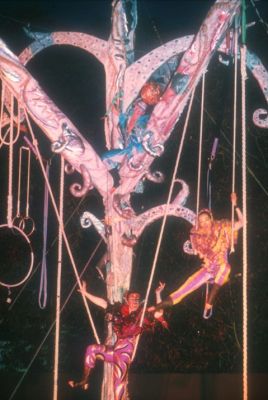 Administrative / biographical history: Skinning the Cat (1988-2002) was a pioneering all-female aerial company from Bradford, founded by Rebecca Truman in 1988.

Rebecca Truman (b.1967), became interested in circus as a child, after reading ‘The Circus is Coming’ by Noel Streatfield.

Rebecca, aka ‘The Grande Dame of Aerial’, studied art and fashion at Bradford College. This is where she first experienced performance on a trapeze. On her second year she persuaded the ‘Bradford Bouncing Back’ campaign to award her £2,000 to stage a fashion cabaret in a nightclub, showcasing designers. This was a great achievement for a student and already showed signs of Rebecca’s showmanship and business skills. For her graduation degree show, Rebecca choreographed and staged ‘Snakes and Ladders’, an aerial performance featuring four aerial trapeze artists and her own costume and sculpture designs at Carlton Bolling Theatre.

Rebecca graduated with BA (Hons) in Art & Design in 1988 and this same year she was commissioned to organise a fashion cabaret and perform a trapeze show by the Bradford Festival in the Wool Exchange. She joined Cathie Sprague to deliver this project, which became the basis of Skinning the Cat and marked Rebecca’s debut as a professional performer. Over the years, Rebecca trained as a professional performer in circus schools in London and Paris while Cathie, who had been teaching printmaking, puppetry and circus, in Bradford in the early 1980s, enrolled on the RA RA ZOO’s circus skills course in 1986, where she trained on the trapeze.

Overtime, Cathie became an all-round performer learning Chinese juggling, fire manipulation, acrobatics, diabolo and clowning. She worked with Skinning the Cat between 1988 and 1991.

Skinning the Cat emerged at the time when experimental circus was still in its infancy and aerial acts outside the circus tent were particularly rare. The name of the company came from a trapeze move, which is an ironic statement against the use of wild animals in circus. Skinning the Cat’s first show challenged the use of wild animals in circus by using the concept of animalistic physicality in their performance and becoming the animals breaking free.

In 1993, Rebecca received a Prince’s Trust grant to invest in a van and a rig for the business, which enabled the company to tour around the UK for the next two years. This same year, she received the Prince’s Youth Business Trust’s ‘Young Achiever of the Year Award’, presented by Jasper Conran and she was featured in Martin Miller’s book ‘The Best of British Women’.

Within a year of its formation the company was touring around Europe to critical acclaim. Under Becky’s artistic vision the crew designed and made their own costumes and set pieces, additionally they managed all aspects of their tours from show production to rig construction. Between the 1990s and the mid-2000s, the business grew from strength to strength leading the way in experimental aerial theatre techniques in contemporary circus.

In 2002, Becky created a special show for the Millennium Dome and she was made artistic director of the Commonwealth Games Opening and Closing ceremonies in Manchester. This same year Skinning the Cat received a grant from the Arts Council to develop what would become the final touring show, entitled ‘Rubicon’.

Skinning the Cat featured in some of the most prominent festivals and events of the time, including; Glastonbury, London International Mime Festival, Circus of the Streets, Covent Garden Piazza, Leeds City Varieties, Stockholm Water Festival, the launch of the Mercedes-Benz in Stuttgart, Aurillac Showcase Festival in France, Tarrega Showcase Festival in Spain, Moscow State Circus, The Rheinhalle Köln in Germany, launch of the Tall Ships Race in both Edinburgh and Amsterdam, launch of the BMW car in Portugal, Sabena Airlines and the opening of the Channel Tunnel. Additionally, they held a residency at the Millennium Dome.

Despite Becky closing the company in 2002, she has remained a prominent figure in aerial theatre and the visual arts. She has lectured at Bradford College, has specialised in special effects costumes, rig design, life casting, sculpting and mask-making, and helps to run a company making rope for aerial performers. Some of Becky Truman’s costumes are housed at the Victoria and Albert Museum.