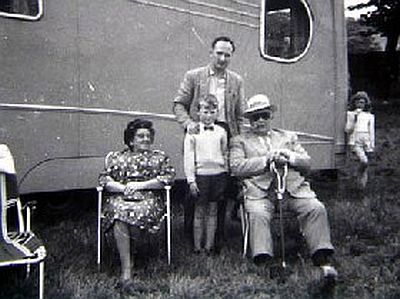 Scope: This collection contains posters, programmes, letters, film, business records and a large number of family and circus photographs. This unique family collection charts the history of the Smart family from their beginnings as fairground showmen to presenting one of the greatest British circuses.

Administrative / biographical history: William 'Billy' Smart was one of twenty-three children born into a fairground family from London. Born in 1894, Smart worked with his family on the fairgrounds of London and the South East from an early age up until his marriage to Dolly in 1925, after which he branched out with his brothers to set up his own fair. By the 1930s he was an established member of the fairground community in the South East and London area and travelled with up to ten rides, with some of his rides featuring alongside Bertram Mills' Circus at Olympia in 1939. More success followed in the war years when he operated some of London's largest morale-boosting Holiday at Home Fairs, supplying entertainment to a war-weary public.

Although always interested in horses, and interested in circuses for some time, it was not until 1946 that Smart came across Cody's Circus and bought the big top. By the time he opened his New World Circus in 1946 he was fifty-two years old, following P.T. Barnum's example in taking on a second career as a circus proprietor.

Billy Smart's New World Circus made its debut at Southall Park, Middlesex, on 5 April 1946, for the first full season after the end of the war. The circus which he had purchased from Cody was run in conjunction with a travelling fun fair and at first he was seen as an interloper by other more established circus showmen. By 1952, the fun fair, which had been increasingly overshadowed by the circus, disappeared to leave room for a bona fide menagerie. Three years later, the two-poler was replaced by a giant 6,000 seat, four-pole round big top with a hippodrome track around the ring, and a vast entrance tent, thus enabling the staging of spectacular parades, which became a Billy Smart's Circus trademark.

His greatest innovation was his relationship with the newly established television networks when he agreed for Billy Smart's Circus to be broadcast live by the BBC in 1947. Over the years, Billy Smart's Christmas Spectacular became a BBC holiday tradition, which ITV took over in 1979 and carried on until 1982. The BBC's first-ever colour broadcast was a 'Tribute to Billy Smart'. Royal Performances took place in London, raising thousands of pounds for charity.

A large part of the success of the circus was the showmanship that Billy brought to the operation of the circus, the large family he could draw upon to run the shows and his ability as a showman to market and capture opportunities to advertise. Whilst other circus proprietors were threatened by the rise in popularity of television and shunned the cameras, Billy Smart embraced them. Smart's Circus grew to be one of the largest in the world, touring every part of the British Isles, and with permanent quarters and an associated zoo at Winkfield, Berkshire, not far from where Smart began his fairground career. His success took the circus through twenty-six tenting tours, winter seasons, frequent TV appearances and the provision of animal acts to other circuses.
Smart died in his caravan on 25 September 1966, shortly after conducting the Romford Boys' Band in front of his mammoth circus tent at Ipswich, which had been set up that morning for a two-week stand. With his large Stetson hat, inevitable cigar and unique flair for self-promotion and publicity, Billy Smart was a showman of the highest order. One of his greatest stunts was when he rode an elephant through the streets of Mayfair and parked it at a meter before inserting a shilling.

Billy Smart was such a colourful character that on his death his lifelong friend Sir Billy Butlin described him as the greatest showman of our time and probably the last of the great showmen.

In the 1990s, the Smart circus toured again with Billy Smart's Quality Big Top Show and most recently Billy Smart's Circus has been presented by Tony Hopkins and is frequently on tour across the UK.