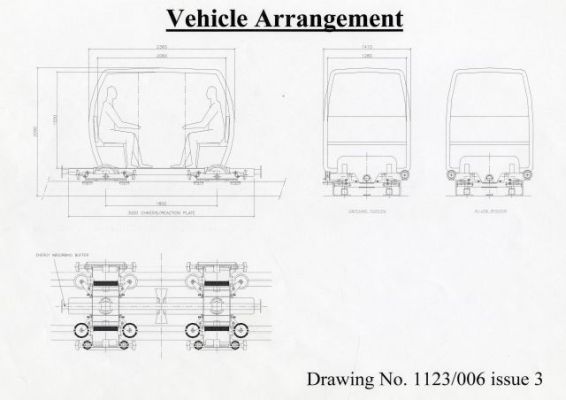 Administrative / biographical history: WGH Transportation Engineering was a specialist company operating between 1989 and 2016 from their headquarters in Doncaster, South Yorkshire. Their business focused on the supply of amusement rides to the leisure industry and the development of engineering solutions for specialist transportation, such as inclined lifts and automated passenger transportation systems.

WGH was founded by Andrew Howarth, John Martin and Tony Brown, the Managing Directors of Gyro Mining Transport (GMT). GMT specialised in the supply of some of the most sophisticated narrow gauge locomotives and large inclined rope-haul transport systems in the world to the coal mining industry.

Upon the decline of British coal mining in the 1980s, GMT looked for opportunities to adapt their existing business model and expertise to new markets. A gap in the supply chain to the leisure industry was soon identified. Anticipating the suitability of their existing products to the amusement sector through the application of creative and innovative engineering and design, they adventured into this industry almost seamlessly.

The new company embarked upon supplying this multimillion pound industry and through its history worked with some of the biggest names in UK leisure including; Jorvik Viking Centre, Cadbury World, Legoland, Blackpool Pleasure Beach, Alton towers and Dreamland. Additionally, they delivered international projects in the Middle East, Europe and East Asia and worked on some of the most iconic projects in the country such as the London Eye, Titanic Experience and Urbis Centre.

Their visionary approach continued to push forward the creative, technological and engineering boundaries of their products, which turned the company into the leading designer and supplier of rides and people moving systems in the UK with a turnover of £2.25m a year.

WGH’s first significant project was the suspended monorail at the New Lanark Visitor Centre in Scotland. A UNESCO World Heritage Site since 2001, the ride built for The Annie McLeod Experience combined engineering with the Pepper’s Ghost illusion and it remains one of the site’s key attractions to this day.

This project was followed by the Ebbw Vale Garden Festival funicular in South Wales in 1992. The first funicular to be built in the UK since 1902 at a cost of £700,000, around £1.5m in today’s money. At 72 metres tall, it served WGH’s signature dual purpose as a leisure experience and functional transportation system.

WGH also expanded its scope of activity into other industries where its success and reputation were based on their ability to produce smart and practical solutions to complex engineering problems.

Some of the company’s most prominent projects were the design of the automated platform for the London Eye in 1999, the inclined lift in the Urbis Centre in Manchester for which they received the "Project of the Year 2003" award, the mechanical systems for Alstom's linear motor accelerated unmanned aircraft launcher in 2008 and the concept for the Vectus PRT project in the early 2000s.

Vectus PRT (Personal Rapid Transport) looked into innovative ways to provide intelligent and environmentally friendly, personal public transport for the 21st century. A 1950’s concept brought into this century through advanced technology and engineering, the Vectus PRT was first tested in Sweden in 2006.

The concept was based on providing autonomous vehicles to carry passengers between designated stations with all the comforts of the 21st century, whilst being environmentally sustainable. Several installations of this system followed, including the one in Suncheon Bay Ecological Park in South Korea in 2010, where it provides low noise, comfortable and environmental friendly transport for three million tourists annually, through its fleet of forty emission free vehicles operating along five kilometres of elevated, double-tracked guideway.

WGH was also involved in cutting edge infrastructure projects such as the Mole System Demonstrator for Mole Solutions Ltd. A company which has been conducting feasibility studies on the introduction of underground freight pipelines since 2002 to tackle the problem of road congestion, revitalise the exchange of goods and the British economy, and replace conveyor systems in mineral extraction.

In the leisure industry, WGH created a long list of iconic rides such as The London Dungeon boat ride, the Inclined Lift for the Blists Hill Victorian Town, part of Ironbridge Gorge World Heritage Site, Wallace & Gromit at Blackpool Pleasure Beach and the Ferris wheel for Bayt Abdullah Children's Hospice in Kuwait. Additionally, they built the dark ride for the Titanic Experience in Belfast, the first ever ride to rotate and move up and down simultaneously while travelling around a track. Finally, in 2014 they recommissioned the UK's oldest rollercoaster at Dreamland, Margate as part of the £18m restoration project to reopen the park.

WGH stop trading as an independent company in 2016 when it was acquired by Stage One Creative Services Ltd., a company dedicated to supplying the entertainment industry.

WGH was built on the principles of sound engineering, design experience and the ability to produce innovative and practical solutions to engineering problems. As 'bespoke' design engineers WGH pushed forward the creative, technological and engineering boundaries, to find ever more innovative solutions to ride and people moving problems. In its 27 years of history WGH became the leading supplier to the leisure industry in the United Kingdom.

WGH provides a new perspective to the history of the popular entertainment industry through technology and design and together with the Orton and Spooner and the Savages of King’s Lynn collections, it covers over a century of ride manufacturing history and practices.