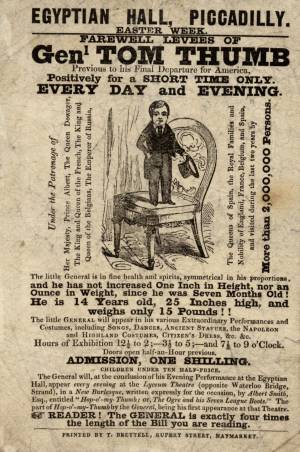 Scope: The collection consists of handbills, programmes and small flyers for shows, fairs, expositions and circus performances in the nineteenth century. The circus material in the Bramwell Taylor Collection was sponsored by the Circus Friends Association of Great Britain and consists of material relating to 19th century touring circuses, individual acts and purpose built hippodromes such as Hengler’s Circus and Astley’s Amphitheatre. Additionally this collection also contains a small amount of personal archive including, correspondence, notebooks, family trees and family photographs.

Administrative / biographical history: The John Bramwell Taylor Collection comes from the estate of John Bramwell Taylor a Yorkshireman who migrated to the South East of England during the 1930s and died in 2003. John Bramwell Taylor spent his working life as a porter at the Travellers’ Club in London and spent all his free time and money collecting printed ephemera. Very well known to dealers and collectors of ephemera he had a deep and abiding knowledge of early printing history. He collected in all areas and the material that is now in the National Fairground Archive is only one small aspect of his Collection. John Bramwell Taylor died in Notting Hill London in 2003 and his large and extensive Collection was split on his death.

Materials relating to acts in the Egyptian Hall are quite prolific in the Bramwell Taylor Collection. The Egyptian Hall (1812 – 1905), owed its conception to William Bulllock, a goldsmith and collector from Sheffield who moved his private collection of natural history material and curiosities to London in 1810. In 1812 he ordered the construction of his London Museum at 22 Piccadilly at a cost of £16,000. Known as the London Museum, or Bullock’s Museum and latterly the Egyptian Hall was heavily influenced by all things Egyptian in particular the Description d’Egypte, (1809-28). This series of engravings first revealed the wonders of the Pyramids and the Sphinx to Europeans, following the archaeological discoveries (or looting) by the French and the English during the Napoleonic wars. Throughout the nineteenth century the Egyptian Hall became a venue for all types of optical illusions, peculiar entertainments and the London premier for P.T Barnum and Tom Thumb in 1844 and latterly the home of magic through its association with Maskelyne & Cooke for thirty two years until its demolition in 1905. Notes on Shows of London