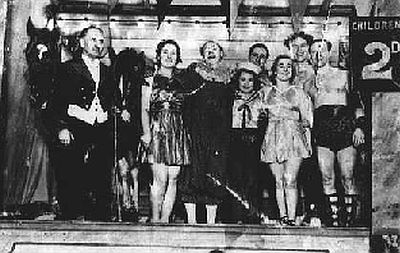 Scope:This collection contains black and white photographs of the Marshall and Scott families, including a visual account of Walter Marshall while serving on the RAF during WWII, the Kayes Brothers' Family Circus, the Baker Family and some images of members of the Testo family as well as other performers and acts. Additionally there are circus programmes, correspondence, newspaper cuttings, birth, marriage and death certificates and Wills.

Extent: 1073 photographs including a photo album, 1 album of indexed photographic negatives and 2 boxes
Name of creator: Marshall and Scott families

Walter Scott senior died suddenly, on the road, on 18th July 1909, aged 66. After his death, the family continued to work together until John Henry formed his own circus and started to travel it to Ireland.

Renee’s early life was spent travelling on the circus in England and Ireland with her brothers, sisters and cousins; the Kayes family. Renee performed in the circus from the age of six and by 1932, age sixteen, she featured in five acts in the family show: the vaultage (which opened the show), the perch, the trapeze, the breakaway ladder (with her brother Johnnie) and the double act on horseback with her father. The double act on horseback had originally been performed by Renee’s mother, before being passed on to Renee herself.

Renee’s early talent soon became a focus of attention and by 1932 she was featured by The World's Fair correspondent in Ireland:

'On a small family circus there is a young artiste working with great enthusiasm. Miss Renee Scott could herself keep a full house entertained 60 minutes out of an hour and a half performance. Renee, who is wonderfully talented, can give a wonderful display in the circus ring…At the age of 16 she features thrilling turns and the acquired qualities rival many artistes 30 years her senior…'

According to her younger brother, George, Renee was the make-up girl, looked after the children, opened the show, found food when they were hungry and was a tremendous artiste.

Eventually the family left Ireland and returned to England where they appeared on fairs throughout Yorkshire and Lancashire. Renee recalls how the circus that appeared on the fairground operated in very different conditions to what they were used to, with twenty to thirty shows a day:

'The fairground was all right if you did one or two shows a day, but we were doing four and five and thirty at Bolton New Year Fair (followed by) twenty the next day…my hands were peeling, (they) were red with the skin coming off, that's with holding on the bar doing the trapeze and I was getting tired. The more tired you are the more you hold on and all the skin was coming off my hands. That was the worst part throwing a lot of shows on the fairground, you did all the shows and it nearly killed you.'

When interviewed by BBC Radio for "Swings and Roundabouts", Renee reminisced about her early life on the family show:

‘I was at it from being six, six year old they put me up, they lifted me up onto the trapeze. I didn't do much mind at first, it was a gimmick you know. A lady come on the trapeze and her husband had a lovely trapeze act and then the gimmick was that the clown used to come in the ring and say " I can get a little girl to do that, that's easy" and I'd be sat in the seat, with a bow ribbon in my hair and little socks and a dress. Then he'd point to me and say "That's the little girl I'll mesmerize her" he used to say. I can see it as if it was yesterday and I was mesmerized. He used to wave his hands in front of my face and I used to get out, up of the seat and then go in the ring. Then we would lift me up and then I'd do about three or four tricks and come down. And that was it.’

Renee was continuing a family tradition; the Scott family had been performers since the 1850s, and their royal circus appeared not only before Queen Victoria but also before King Edward. Scott's Royal Circus incorporated both family acts and star performers into the show (which had forty horses, clowns, trapeze and high wire acts), with members of the family appearing at the top of the bill.

Walter was born in Doncaster on 13th July 1916 into a long standing Yorkshire fairground family, the Marshalls. After their marriage, Renee travelled the fairs of Yorkshire with her husband Walter, who managed the family business, Marshalls Modern Amusements Ltd., and operated a considerable amount of equipment in his own name. He was a life member of the Showmen’s Guild and a Trustee of both the Central Office and the Yorkshire Section. He was a member of the Yorkshire Section Committee for over 20 years, a past Chairman and delegate to the Appeals Committee for many years. Walter was also one of the founding members of the Amusement Roundabouts Association.

Their daughter Sandra was born in 1940 while Walter was serving in the RAF during WWII, where he reached the rank of Sergeant. Walter was issued his licence to fly private flying machines on 26 September 1936, age twenty, in London by the Great Britain and Northern Ireland Air Ministry and was immediately assigned to the Middle East, where he remained serving his country until the end of the war. Walter and Renee’s second child, John, was born in 1946 shortly after the end of the war.

Walter died in 1970 age 54 at the family caravan site, in Atlas Mill Road, Brighouse, of coronary thrombosis. After his death Renee continued the family business with her children until she retired to Brighouse. For her eightieth birthday her daughter and son in law, Sandra and William Wright, presented her with a painting they had commissioned from Joe Scarborough which traced her life and experiences on the circus and fairground.

Many members of her family and the Kayes family are still associated with circuses throughout the world, and her brother George's family still perform in America.