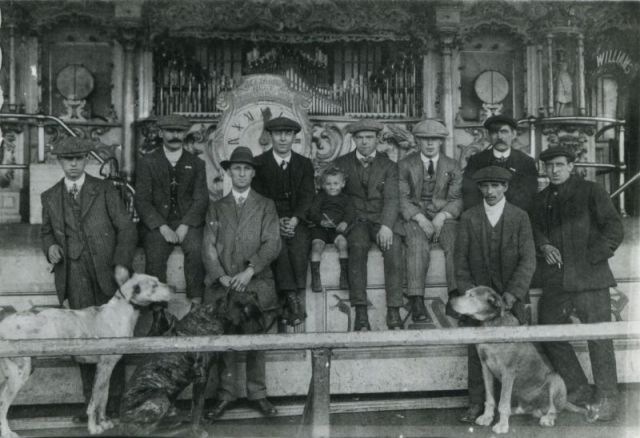 Scope: This collection contains research material by Pauline Tindale and a small amount of original archive related to Randall Williams and his descendants, including birth, death and marriage certificates and photographs.

Administrative / biographical history: Randall Kay Williams (1846-1898) was one of the first showmen to introduce moving pictures to the travelling fairground.

Randall was born in Liverpool to Thomas Williams of Warrington (1824-1881) and Sarah Williams nee Glazebrook (1829-c.1868). The Williams family were showpeople who began touring in the mid-1840s with various attractions such as mechanical exhibitions, fine art shows and waxworks.

Randall started his career as a showman following the family tradition of sideshows in the late 1800s and toured around Britain for 25 years, first with a ghost illusion and then with a bioscope show.

Moving picture technology was developing in Europe in the late 1800s. Many had attempted to present public shows but failed, until in 1895 the Lumiere Brothers presented the first quality commercial public moving picture show in Paris. Randall, a shrewd businessman, who liked to keep a step ahead of his fellow showmen by bringing the latest and most innovative shows to the fair, incorporated this new technology to his existing ghost shows.

Randall was first recorded using the cinematograph in November 1896 at the Rotherham Statutes Fair, mainly showing Pepper’s Ghost illusion. A year later he presented a combined new attraction at King’s Lynn Mart for the first time, ‘The Moving Pictures’. The roaring success of his show set up a new trend on the fairground, which was soon followed by showmen all around the country.

Randall’s shows often use Pepper’s Ghost illusion. Pepper’s Ghost, was first shown at the Royal Polytechnic in 1862 by John Henry Pepper (1821–1900). It consisted of a stage specially arranged into two rooms, one that can be seen by the public and another one which is hidden, and a set up using electricity, a mirror and a pane of glass positioned at specific angles to reflect a ghostly figure onto the stage. The show fed the Victorian era’s thirst for magic, science and technology through the combination of mechanical development and ingenuity and became a staple of many of Randall Williams’ shows between the 1870s and 1890s.

Randall was a regular at the Islington World’s Fair Exhibition Christmas performance where he introduced his ground breaking moving image show. His film repertoire included; Louis Fuller and the Serpentine Dance and the Czar in Russia. In 1897 he exhibited at the Victorian Era Exhibition in Earl’s Court, where he paid homage to the Queen by showing footage of her Diamond Jubilee Procession. The opulence and quality of his shows amazed his audience and gained him the title of ‘King of Showmen’.

Randall was a keen advocate of the travelling community and worked to protect their way of life, becoming one of the founders of the United Kingdom Van Dwellers’ Protection Association, now known as the Showmen’s Guild of Great Britain. Randall became Vice President for the Manchester section and was a vocal campaigner for travelling communities and their livelihoods.

Randall’s last show was at Freeman Street Market, Great Grimsby, where he died of Typhoid fever. Randall’s funeral was conducted by Reverend Thomas Horne, also a champion of the Showmen’s Guild since its inception. After his death only his two surviving legitimate daughters inherited his state while the children he fathered with Annie missed out because they were born out of wedlock.

After Randall’s death in 1898, his daughter Caroline, son-in-law Richard Monte (1877-1953), and brother James (d.1939) carried on his shows. Richard Monte had been employed at ‘Haydon and Urry Ltd.’, one of the first companies to produce cinematographs for showmen. Using the popularity of Williams’ exhibits, Caroline and Richard toured their bioscope under the name ‘Randall Williams Cinematograph Show’ from 1899 to 1913. In 1906 they added a large 110-key Gavioli Organ to the show. It was considered one of the best in the country, taking 4 years to construct and boasting 3200 pipes as well as automatic coloured light changes. The shows were highly praised by the local and national newspapers alike.

In 1913 the show was almost completely destroyed in a fire at Thirsk Marketplace, and the bioscope was one of the items that was lost. This didn’t stop the Monte-Williams family, however, and they continued travelling with attractions such as a Scenic Railway and steam gondolas.
During the first years of WWI the family continued travelling their shows and organised charitable concerts and events to raise War Relief Funds for the war effort, joining the new wave of voluntary activity and the surge on the foundation of charities around the country. By 1918 restrictions on travelling and lighting had taken their toll on the business and the fairground equipment was sold off. This same year Richard started to work for the Forestry Commission hauling timber with his traction engines, steam wagons and horses.

After the war, Richard returned to his original occupation running a chain of cinemas until 1924 when Caroline and him separated. He then went to manage a Scenic Railway attraction for Pat Collins Junior in the Midlands and later settled on Canvey Island where he died in 1953. James Monte continued to tour his show during and after the war until 1933, when he returned to London to run a company which supplied gaming machines until his death in 1939.