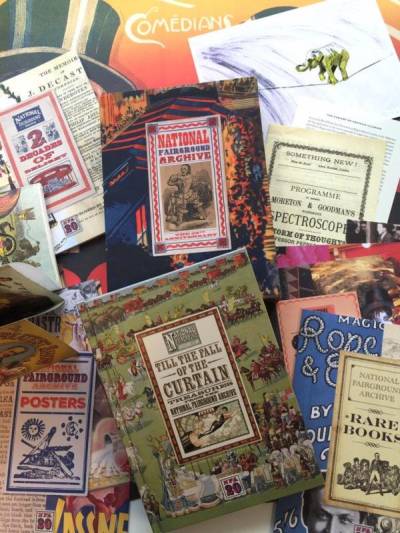 Scope: This collection contains original artwork by five different artists, including paintings, sketches, prints, a sculpture and a variety 3D objects as well as the 100 Treasures from the NFA book and the archive of its production process containing all the printer’s proofs, emails, essays and 3 CDs of images and the 2 Decades of Delights book both produced by the NFA.

Administrative / biographical history: This collection consists of material created to mark and celebrate the National Fairground Archive 20th anniversary. The original artwork was commissioned from contemporary artists who found inspiration in different aspects of the NFA collections.

Florence Blanchard based her work on some of the most remarkable female performers represented in the collections such as Lulu Adams and Florence Shufflebottom. ‘My work invites the viewer to immerse itself in an imaginary, uncanny world. Bold geometric shapes, representations of particles, fluorescent colours and gold leaf collide in a planned riot of abstraction. From time to time, figurative forms, such as beat girls and wild animals inhabit these dreamscapes, giving my work a science fiction quality. It’s a world where ice cream vans and vintage American cars drive through particular cultural moments and inspirations: the 1950’s, comic books, fair grounds and science. Underpinned by a knowledge that all matter is made of particles – whether animal, human or mineral – my paintings and screenprints magnify what the human eye can’t see, offering a unique macroscopic view of the world. Whether small or large format, my works are generated with a full-bleed finish, signifying the false promise of infinity and matter that has no beginning and no end. For the National Fairground Archive’s twentieth anniversary I produced a series of artworks exploring the theme of female acts. Using the archives original photographs and a selection of books available in the reading room I was able to research the world of specific artists such as Florence Shufflebottom, Lulu Adams and Koringa, who independently brought a diverse range of performances, from cowgirl to clown to fakir. Each piece of artwork is an ode to a specific act by these female artists.’

Pete McKee found inspiration on local fairgrounds and specifically on his childhood memories of attending Oaks Park fair in Sheffield with his dad and created a sequential narrative work summarising the best experiences and memories of their visits. ‘The most exciting thing to happen on our estate was the arrival of the fair. This happened twice a year, once in summer and again in winter. As a child the fairground was a place of excitement and fear. The type of fear depended on your age; as a younger child the fear lay in the safety of the ride and I couldn't walk past the Big Wheel without wondering if it would come off its axis and roll down Blackstock Road all the way into town, or imagining one of the twister carriages flying off its spindle and sending the unfortunate passengers off into the bushes. Of course this never happened but it added an extra element of excitement to the ride. The other fear came in your teenage years when you worried about bumping into the kids from a rival estate. I fortunately never witnessed such altercations but they were a constant topic of conversation at school on a Monday morning.

Through my eyes the fairground was a mystical, wondrous place of multicoloured, glowing castles owned by kings who operated the machinery whilst their queens ran the smaller rides and knights rode the bumper cars and waltzers, taking money from their subjects. It didn’t matter that the seats on the ride were patched up with gaffer tape, that the kid taking your fare had mucky hands or that the prizes you won were worth a fraction of the money you spent winning it in the first place - all that mattered was the noise, the smells and the music that entered your life for a brief moment and the world of the council estate was forgotten.

I've created five personal memories of going to Oakes Park fairground with my dad and by using the resources of the Fairground Archive I’ve been able to recall some fond memories of the magic of the fair.’
Paul Evans created work inspired by the theme of performing animals. ‘This new body of work has been inspired by a number of lively discussions with Professor Vanessa Toulmin and by a number of exploratory visits to the collection.

The acts depicted in these paintings and drawings include: a parachuting cat; a tightrope walking elephant; a piano playing seal; a bicycle riding bear, and a Wall of Death riding lion. Each of these animals is in a precarious situation, balanced between opposing forces that might result in death, injury or an embarrassing fall.

All of these acts reflect real life circus or fairground acts from the nineteenth or early twentieth centuries. Some of the situations depicted have been exaggerated for dramatic effect, but most are fairly close to the truth.

Although these acts were greatly loved, and the animals that performed in them were the subjects of great acclaim and applause, enlightened attitudes towards animal welfare have meant that they have now ended in this country. Like our attitude towards the exploitation of other animal species this marks, in my view, a positive step in the development of the consciousness of our species. This is something to be celebrated even as we might regret the passing this uniquely vibrant form of popular entertainment.

These paintings thus reflect a deep interest in the changing perception of ‘Animal Acts’ that has occurred in human consciousness over the last few decades; a change in consciousness that has had broad implications throughout society, and acts as a powerful indicator of the ambiguities that surround the relationship between the human animal and other species.

The paintings have all been made using oil paint on canvas and are brightly coloured for maximum emotional impact. A variety of techniques have been used from thin, wet in wet washes to thickly applied impasto brush strokes. The paint has been poured directly onto the canvas, dripped, scumbled, scraped, drawn in thick skeins across the surface and applied in transparent glazes. Each design reflects something of the structure of what can be seen in many of Francis Bacon’s paintings, theatrical stage settings within which violent acts of enormous emotional charge can be perceived.’

Anthony Bennett found inspiration on Omi, fairground sideshow performer who first attracted the artist’s attention to the NFA collections and by whom he has long been fascinated and the Orton and Spooner collection of fairground ride designs. ‘The inspiration for “Omi and He” transpired some time ago. And I regard the finished piece as my homage to the NFA.

My first contact with the NFA was in 2005, when I was researching the life of Horace Ridler, aka ‘The Great Omi’. I had been commissioned by Cartwright Hall Museum and Art Gallery, in Bradford, to create a portrait figure of Omi, working with curator Joolz Denby, for the show “The Body Carnival”. I rang the archive, and spoke to Vanessa Toulmin who welcomed my enquiry with great enthusiasm, and when we met, she produced a book from the archive written by George Burchett, who had tattooed Horace, which had great plates of the tattoos on Omi’s head and arms, and a glimpse of the tattoos on his torso. Invaluable information, which meant I could proceed immediately with the sculpting of my figure.

For a long time I have admired the books on fairground architecture in the reading room, a favourite of mine being the amazing carousel creatures, being particularly fascinated by the centaurs. The Orton and Spooner centaurs had the body of military men from the waist up, on a traditional horse body.

The base is inspired by decoration on a flywheel on a traction engine, again which I came across in the reading room, and I was determined to include brilliant cut mirrors in my design, as they feature so beautifully in carousel architecture.

And then there’s “He”. He is inspired by an original drawing in the NFA’s Orton and Spooner collection, and a character called “He”, in the 1924 silent movie “He who gets slapped”, played by Lon Chaney.’

Finally, Mark Copeland and Sarah Munro worked in collaboration to recreate extraordinary Victorian and Edwardian characters in objects, dolls, prints and photographs, all of which are artistic impressions and photomontage, not original objects.

‘For the NFA 20th anniversary exhibition, Sarah and Mark are pleased to be able to make a donation to the archive of some inherited scrapbooks and ephemera, and a number of extraordinary dolls, which were the personal collection of Violet the daughter of Gladys Crabbe a ventriloquist who, with her dummy Gladstone, apparently ‘trod the boards’ in the later part of the 19th century.’

Additionally, this archive also holds the complete archive of the production of the NFA20 anniversary book highlighting 100 treasures from the NFA and includes emails, essays, CDs and all the printer’s proofs, documenting the creation of the book.