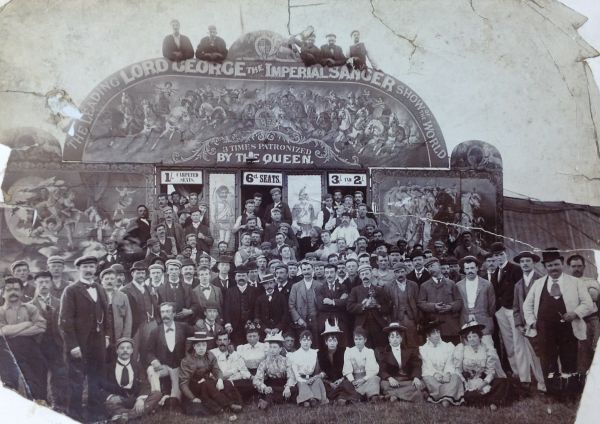 Scope: Collection of black and white and some colour photographs, negatives, handbills, programmes and other items of ephemera relating George Sanger's circus and the Hall by the Sea.

Administrative / biographical history: The Sanger family of showmen started with James Sanger (c1778-1849), who originated from a well to do farming family from Wiltshire. Farming life, however, did not suit James who left for London in his teens. While in London, James was press-ganged by the Navy, who were in desperate need for sailors to fight the Napoleonic Wars. James was just 18 when he was seized by the press-gangs at London Bridge and forced into naval service for 10 years. During his service he fought at the Battle of Trafalgar under Admiral Lord Nelson in 1805. A year later James was finally released from service with an annual pension of £10 and a letter entitling him to pursue any legal trade he wished without restrain. James invested his navy pension on a peep show, a wooden contraption in which the viewer could see dramatic presentations narrated by a showman, and started to travel around the fairgrounds of Great Britain. A popular show with the pundits was the depiction of the battle of Trafalgar, which he accompanied with his own first hand eyewitness account.

James married Sarah Elliott (1787-1852) and they had nine children, including John (1819-1889) and George aka ‘Lord George Sanger’ (1825-1911). Between the two brothers they will turn the name Sanger into one of the greatest names in British popular entertainment history and George into one of the most important British showmen of the 19th century.

George was born in Newbury, a historic market town in Berkshire in 1825.

The two brothers grew up on the fairground, working in the family’s peep show. In 1848 they bought some canaries and mice and trained them for exhibition. This humble beginning into animal performance within the fairground scene and their business ambition, built up to the formation of the Sanger's Allied Circus in 1854 at the King’s Lynn Charter Fair, which they operated with a few family members and friends. This small outfit was a far cry from what the Sanger name will became in the showmen community and history, but grew from strength to strength and by 1858 Sanger’s circus could boast of presenting the largest stud of horses ever seen in the European continent and visited over two hundred towns in a nine-month season, giving two shows a day. By the 1860s the Sanger emporium owned ten permanent circuses between Plymouth and Aberdeen.

One of the brothers’ popular shows was the pantomime ‘Lady Godiva’ featuring a well-known equestrienne, Ellen Chapman (1831-1899). Ellen was the eldest daughter of Harry Chapman (1803-1888), of the Chapman Circus family. She was born in Liverpool in 1831 and grew up with the Manders family, of Wombwell's Menagerie. While with the Wombwells, she became one of the first female lion-tamers, known as 'Madame Pauline de Vere, the Lady of the Lions' and ‘The Lion Queen’ and was hailed to be the first woman ever to put her head inside a lion’s mouth.

George and Ellen got married in 1850 in Sheffield and Ellen immediately became a key act on the family shows. She appeared in pantomimes, performing the serpentine dance in the lions' den and impersonating 'Brittannia' in the acclaimed Sanger's circus processions.

In 1856, when George and John added wild animals to their circus, Ellen returned to her former profession as a lion tamer. By 1858 they had added six lions and ten elephants to the show which proved to be a big winner with the public.

The Sanger brother’s expansion into circus greatness continued with the acquisition of two of the most famous and reputable circus venues in London; the Royal Agricultural Hall at Islington in 1870 and Astley’s New Royal Amphitheatre in 1871, which they bought from William Batty’s widow.

By this point Sanger's Circus travelling road train was said to be two miles long and reputedly had around ten wagons to carry the tent and seating, a lamp wagon, eight or ten living carriages, a foal wagon, ten wild animal wagons, a harness wagon, a portable blacksmith's forge, property wagons, wardrobe and dressing wagons, a band carriage and at least six great tableau parade cars.

From 1874 Sanger also presented tenting shows on the Continent for fifteen seasons, travelling up to 160 horses, eleven elephants, a dozen camels and about 330 staff.

During his extensive and impressive career as a circus proprietor George Sanger presented two Royal performances before Queen Victoria, the first at Sandringham on 8 January 1885 and the second at Balmoral Castle on 17 June 1898.

George Sanger was a respected member of the showland community and although he spent most of his later life in the circus, he maintained a strong link to his fairground roots and was elected the first President of the Showmen's Guild of Great Britain in 1890, a post he held until 1909.

George Sanger was murdered on 28 November 1911, at Park Farm by one of his employees for unknown reasons. His circus and effects were auctioned off by showman Tom Norman aka ‘The Silver King’.