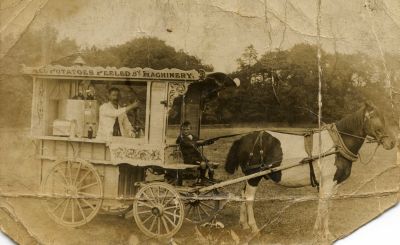 Administrative / biographical history: The Dobson family come from a long history of travelling showmen from the Midlands, with various branches of the family travelling the fairgrounds from the 1900s to today.

The Dobson family appears to have first adventured into the travelling fairground business with Thomas Dobson (1845-1927), who like his father Samuel was a carpenter by trade, and his wife Ann Bembridge (1845-1923), the daughter of a gun barrel rifler. Thomas and Ann married in 1864 and had twelve children, eight of which survived into adulthood. Ann Deborah ‘Annie’ (1866-1957), Samuel (1867-1915), John Thomas ‘Tom’ II (1869-1957), William Frederick ‘Bill’ (1871-1946), Florence (1876-1902), Arthur Hebert ‘Bert I’ (1877-1912), Charles Henry (1879-1963), Alfred (born 1880-1881) and Edith Nellie (1883-1965). Thomas and Ann lived in Birmingham and by 1881 the couple were living amongst the travelling showmen community, although Thomas was still describing himself as a carpenter at this point. It is worth mentioning that the family also developed a tradition of trading scrap metal. The original scrapyard was set up by Tom and Ann in Corporation Street, Birmingham, and members of the family have continued trading scrap metal into the twentieth century from the heart of the city, more recently under the name of Charles T. Dobson Ltd.

Annie, the eldest daughter of Ann and Thomas married George Ford (1860-1932), who travelled the Dobson’s shooting gallery at the beginning of the twentieth century as well as other juvenile rides and stalls. Annie and George had two daughters; Hilda (born 1890) and Josephine (born 1894). George had an accident which damaged his leg and forced the family to take on help to run the business from George Wood. George Wood eventually became a member of the family when he married the Dobson’s eldest daughter Hilda. George Wood and Hilda gradually took over the family business and her parents Annie and George retired from the fairground business to Wardle in Lancashire to run a farm. At the breakout of WWI George was conscripted and served in the army. This marked the end of George’s career in the fairground business as he established a transport business upon his return from the war.

Arthur Herbert ‘Bert’, who was the sixth child of Thomas and Ann, married Elizabeth Bembridge. Bert’s career on the fairground was short lived as he died at just thirty five years of age. His son, Bert II (1908-1959), continued the family tradition and travelled with Collins and Simon & Greatorex. He was reported to have travelled thirty feet of sidestuff, two hoop-las, an arcade and a set of chairs at different times during his career. Bert II married Ginny Hickman (born 1916), forging links to a well-known fairground family. During WWII Bert II was spared active service due to poor health, instead he undertook civilian work at RAF Shawbury. Through this period he managed to remain working on the entertainment business by running a games shop. Bert II and Ginny had two children; Bernice and Gary. It was Gary who continued the family business on the travelling fairground under the name of Herbert Thomas Gary Dobson, travelling shooting galleries, hoop-las and juvenile rides.
William Frederick ‘Bill’ Dobson, the fifth child of Thomas and Ann, also became a showman. In 1894, he married Mary Ann Cartwright (1877-1953), who came from a family of Lancashire showmen. They had nineteen children, of which only six survived, amongst them were; Ernie, Lydia, George, Tom (born 1916) and Josephine (1905-1993). Bill and Ann travelled with Tom Drakeley in the early 1930s before settling in the Sutton Park Amusement Park as tenants of Pat Collins. Several of Bill’s descendants went into the fairground business, namely; his son Tom, his daughter Lydia, who married George Bennett, who used to manage the Ghost Train for Pat Collins, and Josephine, who married Albert Hedges.

Samuel, the second child of Thomas and Ann, was best known for presenting a horse-drawn chip saloon at fairs, although later he added stalls and juveniles to his business portfolio. Sam married Emily Best (1867-1928) in Birmingham in 1890 and together they had five children; Thomas ‘Tom III’ (1892-1975), Bertram Albert ‘Bert III’ (1894-1958), William John ‘John’ (1904-1960), Gertrude ‘Doll’ and George William (1899-1918). Sam and Emily’s three oldest children followed the family tradition by going into the fairground business and created a long lasting legacy as their descendants can still be found in the fairground today, while Gertrude married out of the business. George William, like so many other showmen of the time was recruited for active service during WWI and served with the Royal Army Medical Corps. He was killed in the line of duty on 30th April 1918 age only nineteen.

Tom III was a showman in his own right from the age of seventeen, Tom was a tenant of Tom Clarke and Frank Wilson and married a cousin of Wilson’s wife, Ida Allcock (1889-1962) in 1913. Tom travelled juveniles while Ida presented a clay pipe shooter. Tom III and Ida had three children; Sam II (1913-1988), Selina ‘Lena’ (born 1917) and Tom IV (born 1919) who grew up at Redditch. Sam presented the juvenile machines with his father and eventually supplemented them with his own hoop-la and hook-a-duck stalls. He married Louisa Drakeley (1932-1987) in 1957 and continued travelling the business together and wintering with the Wilsons. Sam II and Louisa had two children; Sam III (born 1959) and Francis (1960-1961). Sam III continued travelling the family business and married Renee Stevens in 1985, they had two sons; Bronson Samuel (born 1987) and Kennedy Samuel (born 1990), who are still fairground showmen.

‘Lena’, who remained based in Redditch, inherited the family’s shooting gallery, which she travelled with the Wilsons and Dobson Brothers around places such as Bridgnorth and Pensnett. She was still travelling in 1996, age 79.

Bert III, son of Sam and Emily, like his brother Tom III, travelled with Tom Clarke and Frank Wilson. Bert married Harriet Tranter in 1919, together they had three children; Bertram ‘Bert IV’ (born 1920), Cedric (1924-1992) and Jim (born 1938), they travelled around the fairs on horse drawn wagons and trucks, until 1926 when Bert III bought his first lorry, his son Bert IV went in the Army in 1940 and was discharged in 1946. When he returned to civilian life he bought two shooting galleries off the Marshall family. Bert IV travelled with the Wilsons for two seasons before marrying Ann King (born 1924) in 1949, after which he and his wife travelled with Billy Watkins, to whom Ann’s sister was married. They presented at fairgrounds in the Herefordshire and Worcestershire area and all the way up to the Black Country. Upon Billy Watkins retirement from the fairground, Bert IV and Ann joined Jennings and Tom Wilson. Bert IV and Ann had a son, Bertram ‘Bert V’ (born 1953) who travelled an arcade, two juveniles and two hoop-las with various lessees such as Tommy Wilson, Graham Stokes and Keith Stanworth. Cedric married Phyllis Stevens in 1949 and Jim married Margaret Stevens and had three children; Lisa (born 1961), Jimmy junior and Matthew (born 1977).

Another son of Sam and Emily, William John, known as John or Jack, was only nine years old when his father died and although he had to wait a few years before adventuring into the family business, he eventually inherited the chippy. He married Ellen Sully in 1928, who was a member of a fairground family from the London area. John expanded the business with a few juveniles, which he acquired during the 1930s. During the pre-war years the family used to winter in a yard in New John Street, Birmingham, next to the family’s scrapyard business. The advent of WWII forced John to stop travelling and settle down in Bournville, where he got a job with a petrol company. Although he never returned to the fairground business completely, he never fully left it either as he continued to take a hot dog stall out on the weekends. John and Ellen had five children; Frederick John ‘John’ (1929-1993), George Henry (born 1931), Doris, Marina and Yvonne.

George Henry completed his National Service after WWII based in Germany, where he was a driver in the Army. Around 1950 he re-joined the fairground with Frank Wilson presenting a hoop-la. George married Jean Lightfoot (born 1935) in 1956. Jean’s family also came from the fairground business, and her first memories are from the war years when the family had to settle near Nottingham, where they run blackout fairs while at the same time Jean’s mother and two older sisters worked in the munitions factory at the Raleigh Works. The family started travelling the fairs again after the war around the Nottingham and Derby areas and Jean recalls attending the first Goose Fair after WWII where sweet coupons were required to obtain candy floss. George and Jean had two children; George Henry (born 1957) and Julie (born 1961). In the first years of married life they wintered with Jean’s family in Bedworth and later in Redditch and Cradley Heath. They opened for the first time on their own at Belbroughton with a caterpillar George had bought with his cousin Cedric and run a circuit of small galas and carnivals. These were hard times and in order to survive they had to alternate the work on the fair with a coal business they run during the winter in Cradley Heath.

John like his brother George went back into the fairground business once he had completed his National Service. He started travelling a chippy, following the family tradition on the catering business and went onto buying a dodgem. As he went onto machines he became business partners with his brother George under the name Dobson Brothers. George retired circa 1988 and passed his business to his son George Henry, who continued to run the family business with his wife Diana and their children. His sister Julie who married Tony Cotton and many other descendants from the Dobson family continued in the fairground business and can still be found in the fairs around the Midlands today.

Related Collections: John and Mabel Strudwick Collection, Anderton and Rowland Collection, Marshall and Scott Collection
Source: On loan from Mrs Susan Danter, niece of Selina Dobson, deposited via Graham Downie
System of arrangement: Catalogued according to type
Subjects: Fairgrounds, Travelling Entertainment, Showpeople, Family Collections
Conditions of access: Items are available to view by appointment in the NFA reading room
Restrictions: None
Copyright: Copies may be supplied or produced at the discretion of National Fairground and Circus Archive, subject to copyright law and condition of the material.
Finding aids: Online finding aid available here