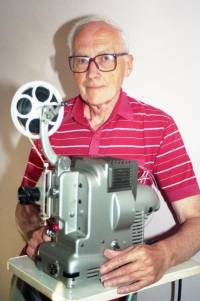 Administrative / biographical history: Vic King (1920-2016), was born and bred in Oxford, where he spent all his life. He was a trained engineer and draughtsman and amongst other companies he worked at Allen’s of Oxford, a long-established engineering firm in the city. Allen’s built fairground rides in the 1920s for a brief period of time, at the suggestion of the showman William Wilson. Their adventuring in this branch of the business culminated with the building of four sets of Gallopers in total, one of which was bought by Wilson himself. By the time Vic took employment with Allen’s, he had already developed a personal interest in fairgrounds and fairground rides, sparked by the presence in the city each September of one of the most famous fairs in the UK, Oxford St. Giles. As many other fairground enthusiasts, Vic enjoyed watching the showmen arrive on the Sunday morning and build up their equipment. Vic created recording of his passion for the fair, first through photography and in later years through 8mm cine film. Vic not only made his own films but he also collected films made by other enthusiasts including Syd Taylor and Edward Albert (Ted) Dandridge. These films provide a unique insight on the workings of fairs, not only at Oxford but also at other locations around the south of England.

In the 1970s Vic applied his skills as draughtsman to the production of a series of plans for fairground model makers. Until then most fairground models had been produced from scratch, the results varying considerably in quality and accuracy. Bringing together his skills as a draughtsman and his understanding of fairground engineering, Vic’s plans, which are still in use today, have enabled model makers to achieve standards much higher than ever before.

In later life Vic suffered from dementia and in 2016 he passed away age 96.

Related Collections: Noel Drewe Collection
System of arrangement: Catalogued according to type
Subjects: Fairground, Travelling Entertainment, Fairground Rides, Transport, Fairground Art
Conditions of access: Items are available to view by appointment in the NFA reading room
Restrictions: Not available for viewing. This material is currently being digitised
Copyright: Copies may be supplied or produced at the discretion of National Fairground and Circus Archive, subject to copyright law and condition of the material. Various copyright owners.
Finding aids: Online finding aid available here