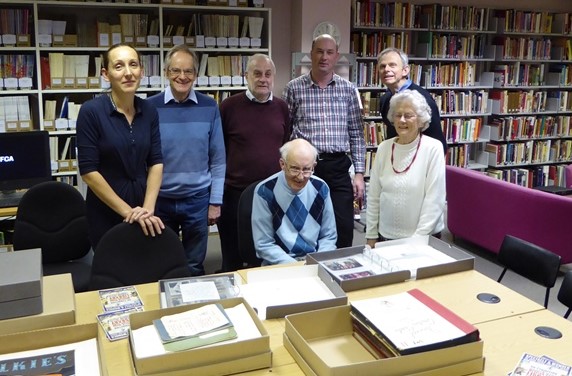 On Tuesday 12th March we received the sad news that long standing member of the Circus Friends Association of Great Britain and supporter of the NFCA, David Harris had passed away.

David Ernest Harris was born on 23 November 1932 in the small Cambridgeshire village of Cottenham. He served an apprenticeship with the Cambridge firm of Northfields and Company where he trained as a painter and decorator. Called up for National Service from January 1954 to December 1955 he was posted to Singapore, Hong Kong, North Korea and Egypt. On return to the UK David worked in London for Maples as a decorator and met his future wife Viv at a social club in the crypt of St Martins in the Fields where they were later married in 1962. Their first daughter, Susan, was born in 1965. The following year the family moved to Norfolk where, initially, David worked for a construction training centre teaching painting and decorating. Daughter number two, Juliet, arrived in 1968. Setting up his own business, David worked as a painter, decorator and sign-writer and also taught at the Technical College in Kings Lynn, where he predominantly taught special needs pupils. He loved this work and continued with it until he retired. As a decorator his speciality was graining and marbling, skills which have almost disappeared these days.

David’s lifelong interest in the circus began when he saw his first circus at the age of five in the summer of 1938. It was Chapman’s ‘Royal Bengal Circus’ on Clacton Pier. He had vivid memories of the Hermans’ rolla-rolla act; the Flying Potters on the trampoline; a riding act by Bobby and Tommy Roberts and lady juggler Roxea Royal. The clown act included the swallowing the candle routine and he thought the subsequent emergence of the candle in the backside of the clown’s trousers was hilarious. His mother was not so amused and gave him a clip round the ear. He joined the Circus Fans’ Association (CFA) in January 1952 after seeing the CFA advertisement in the Bertram Mills Circus programme. David was a stalwart and very active member of the Association for many years – as a Council member, East Anglia area rally organiser, writer of CFA notes in The World’s Fair, joint organiser of the annual Circus Reunion and a regular contributor the magazine King Pole. He served as CFA President from January 1988 to January 1991.

David had an encyclopaedic knowledge of circus and in 1986 and 1987 won the CFA Mastermind competition. His favourite period was the 1950s and 1960s when British circus was enjoying a new golden era after the Second World War. His expertise on the ‘Big Three’ – Bertram Mills’, Billy Smart’s and Chipperfield’s – resulted in his series ‘Let’s Put the Clock Back’ in King Pole and he intended to write a book on Mills but, with his family and business commitments, he never got round to it. However, he generously made his research and archives available to David Jamieson when he wrote his books on the ‘Big Three’. His circus hero was Albert Schumann - “He could quietly get a ring full of horses back into their places in line with just a few words and a click of his fingers. It never failed to win a round of applause at Olympia.” He held strong views on what was right and what was wrong with British circus and expressed those views in a forthright manner – “I would like circus to have the prestige it had in the days of Mills and Smarts. Circus had a wonderful name then.” Anyone spending time in his company would have appreciated his knowledge of circus and his unique sense of humour. David was always a keen supporter of the National Fairground and Circus Archive at Sheffield. His last few months were spent in a lovely care home in Kings Lynn where Viv and Su visited him several times a week. David died on 15 February 2019, an ardent circus fan right up to the end.

This article has been kindly provided by Mark Twitchett