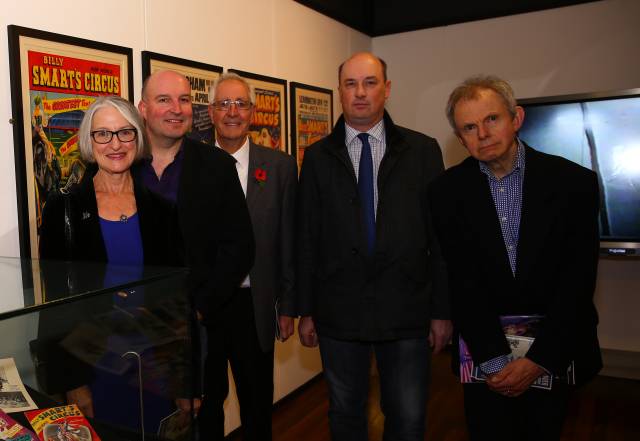 On Monday 10th July we received the sad news that David Jamieson, former President of the Circus Friends Association of Great Britain (CFA) and Editor of King Pole, passed away the previous Sunday after a long battle with Parkinson’s disease.

David had a long standing relationship with the National Fairground and Circus Archive (NFCA). For years, he worked as a key contact between the CFA and the NFCA, directly supporting the development of the CFA Library at the Archive by contributing to the creation of one of the most comprehensive public circus literature collections in the UK and by facilitating the transfer of publications. More recently, David played an instrumental role in the donation of the CFA archive to the NFCA. This marked a significant turning point in the history of both organisations and made the NFCA the largest public repository of this type in the UK.

David was passionate about circus from a very early age. He attended his first show in King's Park, Bournemouth in 1955, age six, when he was taken to see the Billy Smart’s Circus as a special treat. The impact of the spectacle he witnessed on that first visit set off a lifelong love-affair with circus. The long lasting impression that the circus left on David increased as he visited other circuses, such as Bertram Mills, which he saw for the first time while on tour in 1957and later at Olympia.

His early and decisive commitment to circus drove a ten year old David to apply for membership of the CFA, after seeing an advert on a Bertram Mills Circus programme. As a junior member he probably never suspected that he would become the organisation’s President over two significant occasions; for its 50th anniversary in 1984 and again for its 70th anniversary in 2004.

In the early 1960s David saw the Blackpool Tower Circus, with its sinking ring and aquatic act, for the first time on TV. Determined to see the show in person, he begged his mother to take the family summer holiday at Blackpool. It was in 1963 that he finally got his wish. 54 years later he still recalled the ringmaster riding a speedboat around the flooded ring and seeing Charlie Cairoli, the most exciting and able clown he ever saw.

For over 60 years David, pursued his passion for circus, visiting circuses all over the world and creating close links to some of the biggest names in the industry including Chipperfield’s with whom he travelled on holidays and weekends. This gave David a unique opportunity to get an intimate insight into the world of animal and human performance and the life of the circus folk. His hands-on experience involved helping look after the big cats, playing drums in the band and even standing-in as ringmaster for a day. His foot has been stepped on by an elephant and he once stopped a lioness from clawing its way out of its den.

Over the years, David amassed an enormous amount of knowledge and recorded his experiences of circus both in writing and through photography, creating a long lasting legacy and a visual record of long-gone shows and performers for future generations. In addition to being the Editor of King Pole for 43 years, he wrote articles for several newspapers including The Guardian and The Independent and wrote, co-wrote or consulted on many circus books including; ‘The Love of the Circus’ with Sandy Davidson, ‘Bertram Mills’, ‘Billy Smart’, ‘Chipperfield’s Circus’, ‘Zippos Book of the Circus’, two editions of ‘Mary Chipperfiled’s Circus’, ‘Dr Marthe Kiley-Worthington’s Animals in Circus and Zoos’, ‘Norman Barrett Ringmaster’, ‘As Told to Geoff Stevens’, ‘ Blackpool Tower Circus – A Pictorial History’ and ‘The Legend of Salt and Sauce by Jamie and Jim Clubb’. He also edited and published books on circus transport, clowns and posters for the CFA.

More recently David assisted Steve Richley with his poster books on Bertram Mills and Smart and in 2016 he was a key consultant for "Sir Robert Fossett's Circus - The Definitive Visual History" by Mark Twitchett and Steve Richley.

As the editor of King Pole, David took the magazine to new heights by introducing the first colour pages, changing to a larger format, adding several innovative features and publishing the King Pole Extra, making King Pole one of the finest circus magazines in the world.

Additionally, he wrote and designed circus programmes and souvenir guides for the Circus World Championships, Chipperfield’s, Robert Brothers and Austen Brothers circuses and his photographs have been widely published around the world.

In 2014 David received the CFA President’s Award and more recently, in spite of his debilitating condition, he committed a great deal of time and effort to the successful housing of the CFA Archive in the University Library and contributed to the celebrations at the exhibition’s opening ceremony and by sharing his experiences, knowledge and enthusiasm with us. We are very pleased that he was able to see this milestone of both organisations and be part of this great achievement.

David will be sadly missed by his wife Bridget, his family and his many friends.