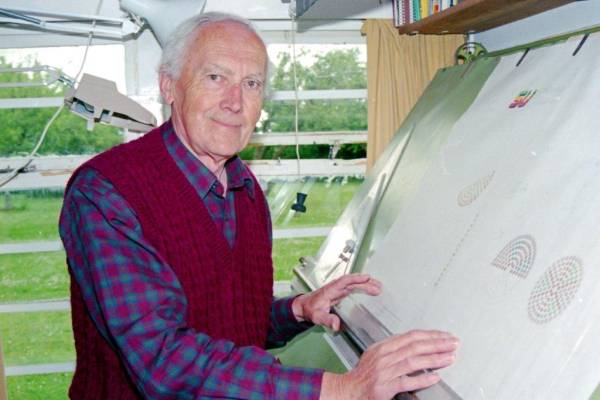 A Sad Goodbye to Vic King

Vic was born and bred in Oxford, where he spent all his life. He was a trained engineer and draughtsman and amongst other companies he worked at Allen’s of Oxford, a long-established engineering firm in the city. Allen’s built fairground rides in the 1920s for a brief period of time, at the suggestion of the showman William Wilson. Their adventuring in this branch of the business culminated with the building of four sets of Gallopers in total, one of which was bought by Wilson himself. By the time Vic took employment with Allen’s, he had already developed a personal interest in fairgrounds and fairground rides, sparked by the presence in the city each September of one of the most famous fairs in the UK, Oxford St. Giles. While at Allen’s and in the knowledge of the company’s history in ride manufacturing, Vic searched through the firm’s stock of old drawings in the hope to find something relating to this work. Vic found a remarkable and unique collection of drawings, which he rescued from potential destruction upon the firm’s closure in 1986. Later on, his pledge to preserve this part of our cultural heritage drove him to generously donate the collection to the National Fairground and Circus Archive (NFCA), to be preserved for future generations.

As many other fairground enthusiasts, Vic enjoyed watching the showmen arrive on the Sunday morning and build up their equipment in St. Giles. Vic recorded his experiences first through photography and in later years through 8mm cine film. These films are now also part of his collection at the NFCA, providing a unique insight on the workings of fairs, not only at Oxford but also at other locations.

In the 1970s Vic applied his skills as draughtsman to the production of a series of plans for fairground model makers. Until then most fairground models had been produced from scratch, the results varying considerably in quality and accuracy. Bringing together his skills as a draughtsman and his understanding of fairground engineering, Vic’s plans, which are still available today, have enabled model makers to achieve standards much higher than ever before.

Regrettably, Vic’s health deteriorated at the end of 2016 and he sadly passed away early this year age 96. He will be missed by his family and friends and all the staff at the NFCA who will forever be grateful for his contribution to the Archive.

A heart-felt thank you to Graham Downie for providing the text for Vic’s obituary and his continued and undivided support to the Archive.