A Brief History of Quackery 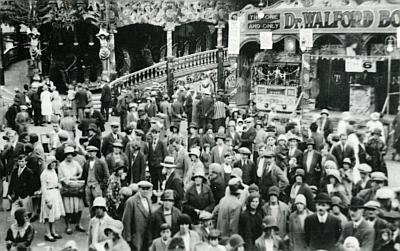 ‘Medicine shows’ have a long and meandering history. They seem to have first emerged in Europe during the Middle Ages with the popularity of the performance reaching its height during the Renaissance. It was during this period that performers, known as mountebanks, found particular favour on the Streets of Venice. The term mountebank, meaning ‘he who jumps on a bench’, was used interchangeably with the term charlatan; the connotations of this being a con-artist, a man who hoodwinks people into believing he is educated while knowingly selling them false medicines.

During the Early Modern period, particularly following the Eighteenth Century Enlightenment, charlatans began to capitalize on the growing interest of the population in the world of science. Through their performance, they entrance their audience with the latest scientific terminology, charming them with strange mechanic wares and boasting of the possession of occult powers.

A central component of the charlatan was his movability. These men passed from town to town, possessing the ability to pack up and move on at speed should even a whiff of trouble with the law emerge. In some instances, charlatan’s employed men who travelled in advance, distributing flyers to advertise their imminent arrival into the town. Charlatans also began to employ other performers for their actual act, becoming increasingly creative as competition between different performers heightened. Indeed, soon these one man shows developed into variety performances, encompassing a whole menagerie of performers – dwarfs, midgets, parrots, apes, lizards and even fortune tellers. In Italy, some charlatan’s travelled with Commedia Del-L’arte troops, a form of Italian street theatre. Here the actors took on stock characters, with clowns intermingling with the audience to drum up a good mood prior to the charlatan’s performance.

The English equivalent to the mountebank was the nostrum seller, more commonly known as the quack. As in Venice, London became a hub of street healers, with quacks selling their wares from the back of their carts. Here too these sellers made use of a host of other performers, with clowns ('Merry Andrews') drumming up support for their masters in the crowds. Quacks used an array of performative tactics to flog their wares. What exactly was being sold varied from quack to quack. Most frequently, they sold cures in the form of potions, often capitalizing on the epidemics of the time such as plague or cholera. Additionally, they offered solutions to more general aches and pains – stomach aches, headaches, tooth aches, and so on. However, quacks were not limited to medicinal cures; some found a more niche market in the selling of beauty products and love potions.

Many quacks understood the need for psychological persuasion, turning the experience into almost a religious sermon with their bombastic assurance. The most successful quacks relied most on their own charisma and charm. However, others combined this with visual tricks, some going so far as stimulating physical injury by stabbing oneself in the stomach. The trick was achieved using a combination of fake animal blood, a false stomach and a protective metal plate and, of course, a blood curdling scream was a must. A much more niche number took the performing side quite literally with so-called High German Doctors, dressed mysteriously in a black coat and carrying a human skull, uttering medical jargon in a heavily afflicted accent. The appeal of these, supposedly, German quacks was their air of exoticism and worldliness. Talk of their successful travels around the globe, curing royalty and heads of state, added a level of mystery and credibility to their claims.

The quack was, initially at least, a man of the people. The majority of English people could not afford a court physician to treat their ailments but may have possessed a few coppers to buy a medical cure. The court physician was at the top of the hierarchy in regard to Early Modern medical practitioners. University educated and most definitely male, such elite physicians were frequently found curing the upper classes of London society. Below the physician was the surgeon whose work was less intellectual and more practical in approach. The surgeon was often called to treat external complaints, skin conditions, boils and wounds, but also performed simple procedures and operations. Beneath the surgeon was the apothecary or druggist. Unlike the formally educated physician, the apothecary was taught under an apprenticeship. A rivalry existed between the two professions; going straight to an apothecary would allow one to cut out the middleman, to avoid the hefty physicians fee. The apothecary was more prominent in rural areas and, in all but name, could be considered akin to a general practitioner or family doctor.

The quack practiced on the edge of the above hierarchy, travelling around from town to town, they offered miracle cures to those unable to afford anything else. The popularity of the quack resulted in a level of wariness within the English ruling classes. The first laws prohibiting quackery were enacted in the early sixteenth century. In time, however, quacks began to gain some semblance of status. This was namely in regard to the licencing of nostrums which, upon being royally patented, helped elevate the position of the nostrum seller. A patent did not mean that the potion was a quality one – nor that it worked – but rather that it contained an original formula. Consequently, by the eighteenth century, the practice of quackery became a form of upper class entertainment, with the rich making a hobby of visiting these fraudulent practitioners as much for the experience than the cure itself.