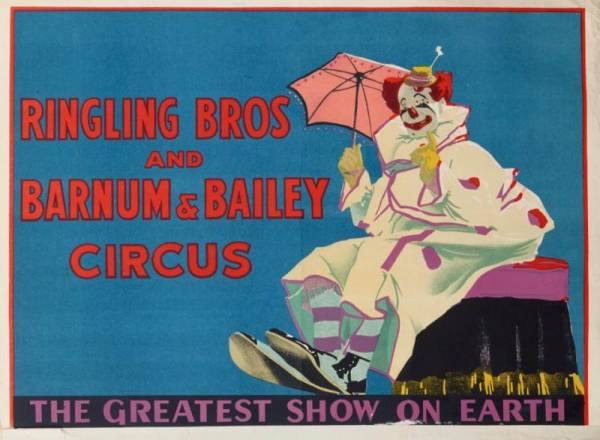 George Speaight defines the history of circus as "the story of that entertainment of human bodily skills and trained animals that is presented in a ring of approximately 13 metres in diameter with an audience grouped all around it." The form of popular entertainment known as circus developed in England around horse acts.

Although travelling zoological exhibitions (known as menageries), acrobats and trick animal acts were all features of entertainment in the eighteenth century and earlier, it was the combination of these features within a circular structure which became known as circus. Philip Astley (1742-1814), the founder of modern circus, staged a show in London in 1768 featuring trick horseback riding and live music. It was presented in a circular structure, and named Astley's Amphitheatre. He later added other acts, such as acrobats, a clown and a band to his performances. However, the term 'circus' to describe this type of exhibition was coined by Astley's contemporary and rival Charles Dibdin, who opened The Royal Circus in London in 1772.

Dibdin's term was used internationally to describe the mixture of horsemanship, comic turns and animal acts programmed as a theatrical spectacle. In 1793, John Bill Ricketts opened the first Astley-type circus in the US in Philadelphia. Ricketts' circus featured a rope-walker, a clown, and riding acts. By the start of the nineteenth century the majority of early circuses in America and Europe based their acts on ideas laid down by Philip Astley.

By the middle of the Victorian era travelling circuses had become large commercial concerns ranging from small tenting affairs to gigantic enterprises housed in permanent buildings or amphitheatres. For the first half of the nineteenth century, circus was largely performed in wooden buildings rather than in tents and proprietors such as Frederick "Charles" Hengler constructed purpose-built buildings known as hippodromes, circuses and amphitheatres in cities throughout the United Kingdom.

Hengler was one of the greatest circus proprietors of the nineteenth century. He was an equestrian, musician, all-round performer and manager of his brother Edward's circus. Hengler's Circus was at first a touring concern, but from the 1850s onwards Charles opened permanent circus sites in Glasgow, Dublin, Hull, Birmingham and Bristol and ran his shows from his headquarters in Liverpool.

The idea of using canvas tenting for outdoor performances was imported from America in the 1840s. At the time Hengler was opening his circus building in Liverpool, Howe's and Cushing's United States Circus was advertising that "Tents now take precedent of Marble Halls." By the 1850s, circuses in America and the United Kingdom already had many of the elements that are associated with them today. Established American circuses before the Civil War (1861-1865) included Dan Rice's Circus, Van Amburgh's Circus, Spalding & Rogers Circus, and Howe's and Cushing's American Circus. During the middle of the nineteenth century European and American circus began to diverge in style and structure. The British and European circus was based on the Astley principal of a single ring. Although the acts performed in the ring became more innovative and complex, the concept remained the same.

In the United States, however, the growth of the new railways in the 1870s allowed circus shows to travel large distances on a scale never seen before and the great train shows were born. To accommodate the bigger attendances the circus owners added extra rings with larger tents, or tops. The circus show became an event with a large cast of performers, more extravagant animals, production numbers, and side-shows. Barnum and Bailey's circus train consisted of between sixty to seventy train carriages.

As the circus evolved so too did the programme. Acts found in the Victorian circus included aerial performances such as the tight-rope and the trapeze, equestrian riding, ground acts such as acrobats incorporating such novelties as the perch act and breakaway ladder, juggling and of course the staple of circus performance the clown. The combination of showing wild animals in the menagerie tradition with tricks and routines led to the rise of the animal circus incorporating lion-taming, elephant acts alongside feats of horsemanship. Circus performers became household names. The most famous tight-rope artist was Blondin who crossed the Niagara Falls in 1859. However, perhaps the greatest innovation was the flying trapeze act, first introduced by Jean Leotard at the Circque d'Hiver in Paris in 1859.

By the end of the nineteenth century the circus was an established and popular form of family entertainment, the aristocracy of travelling entertainment. Queen Victoria invited a range of circus showmen including P.T. Barnum to perform for the royal family at Windsor and Balmoral from the 1840s and this royal patronage secured its place as both an art form and one of the most popular of all the forms of entertainment exhibited during her reign.

From that auspicious time in the late eighteenth century, the circus has travelled, developed and incorporated many more elements, with each generation of circus showmen challenging and innovating the art form. The showmen that feature largely in the NFCA's collections have two things in common. First, none of them came from traditional circus backgrounds. Second, each played a key part in expanding the concept of circus, thereby bringing the circus experience to new audiences. Each one of them defined circus for their generation. Beginning with the Father of Circus, Philip Astley, we move to the two great showmen of the nineteenth century Lord George Sanger, who did more than any other to broaden the circus's appeal in the United Kingdom and P.T. Barnum, showman supreme.

The twentieth century circus is dominated by three major personalities, each one having defined the art form for his generation. Bertram Mills, who entered the business as the result of a wager, fairground showman Billy Smart, who purchased a circus to the amazement of his family and lastly Gerry Cottle, a stockbroker's son from London. Their stories demonstrate that circus has always been the place where the most talented can run away to.

Today's circus incorporates dance and new media, is performed with or without animals and may even contain a narrative structure based on immersive theatrical practice. Modern circus is not limited to the concept of a thirteen-meter diameter ring with an audience grouped around it, but one aspect should distinguish all circuses: it should always incorporate at its heart exceptional human bodily skills being pushed to the extreme for the gratification and entertainment of the audience.

The NFCA is attempting to cover all aspects of how this great and wonderful art form has evolved over the last three centuries. Recent donations have extended our collections to the birth of contemporary or new circus, alongside the more traditional shows. Our international poster and programme collections encompass the history of circus from the nineteenth century to the present day.