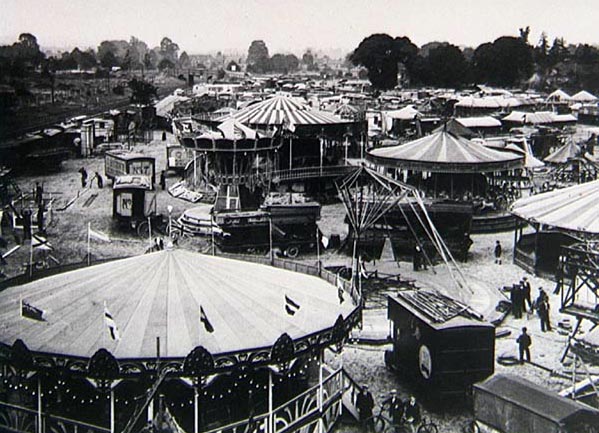 Many of the historic fairs that take place in the United Kingdom have at least one period of controversy where the local fair has been threatened by abolition. Any number of factors can lie behind this threat: a refusal on the part of the showmen to attend due to the increase in rent, the threat of the relocation of the fair from its traditional site, or a call for its abolition under the 1871 Fairs Act. Mitcham Fair can claim all of these during its varied and turbulent history.

For historians, enthusiasts and would be abolitionists the controversy generally comes back to the question of the missing Charter and many a quest has been undertaken over the century to find this grail! However, like a proportion of the fairs that take place, the prerequisite to hold a fair in a particular area can also be claimed by prescriptive right.

Mitcham's claim as an historic fair is in part due to custom and many fairs were allowed to take place by the King or his representative in the borough, due to their long term establishment. According to local folklore, Mitcham was granted a Charter to hold a fair by Elizabeth I, who so enjoyed watching the village festivities during her visit that she granted the right to hold an event every year. Whatever the origin of the fair, and the recent addition of Status to its title is just one of the varied claims made over the century, Mitcham's fortunes have flourished.

The 1811 edition of 'Owen's Book of New Fairs' associates Mitcham Fair with the selling of toys and states that it takes place on the 12th of August. Although the fair had been associated with periods of gambling and illegal tipping, by the middle of the nineteenth century the worst of the excesses had disappeared. Theatrical booths presented by Richardson became regular attendants to the fair and by the 1860s the dancing booths were one of the most popular attractions at the fair. However, with the introduction of mechanisation to the fair the once prominent booths gradually became superseded and by the early 1900s steam powered roundabouts and Biddall's bioscope show became the wonder of the age.

Over the past century, Mitcham has been the scene of many battles and confrontations between the Showmen's Guild and the local council and three major disputes have occurred in the 1900s, the 1920s and the most recent in the 1970s. An important case was the proposed abolition of Mitcham Fair in 1906. The franchise for the fair was part of the estates of James Bridger, Lord of the Manor of Tamworth, and in 1905 this was sold to a board of trustees, which included representatives from Mitcham Parish Council. This decision by the trustees to buy the franchise was partly due to the condition in the 1871 Fairs Act that only the owner of the fair could apply for its abolition. The sale of the franchise altered this, and in 1906 the Council applied to the Secretary of State for the abolition of the local fair under Schedule 6 of the 1873 Fairs Act.

The Showmen's Guild acted swiftly on this matter and arranged their objections on two fronts: firstly they immediately petitioned the Secretary of State for the right of representation, and secondly, they organised a public protest meeting to be held on the fairground. However, despite local support for the fair, three representative showmen were served with writs for occupying their accustomed pitches on the fairground. By 1907 the number of showmen serving an injunction had risen to forty five and by 1908 the Council were questioning their policy towards the fair.

In order to support the tenants of Mitcham Fair, an appeal was launched through World's Fair for donations to cover the legal fees of the showmen involved. When the Council appealed to the Secretary of State to abolish the fair, the request was denied and over the next seven years an intense battle was fought over the future of the fair. The matter was partially resolved in 1911 when a compromise was reached between the Council and the showmen when the management and control of the fair was leased to the Showmen's Guild. In 1913 a joint party of the local trustees and council members abandoned their petition of abolition and applied to the Secretary of State, under the Fairs Act of 1873, for the removal of the fair to a less inconvenient site within the locality.

The outbreak of the First World War prevented the removal of the site from Fair Green and Mitcham was one of the few fairs that continued to open throughout the war years operating under certain lighting restrictions.
One of the interesting customs associated with the opening of Mitcham Fair is the tradition of the golden key. The earliest reference to this event can be found in 1911. During the lavish opening ceremony the Reverend Thomas Horne revived a quaint ceremony dating back to Queen Elizabeth, when the gates of the fairground were opened according to ancient use and custom with this key.

The tradition of the Golden Key became extended and by 1913 it was awarded to the proprietor of the best attraction on the fair, which in the years leading up to the First World War, was awarded to William Wilson.
By the 1920s the trustees of the fair were once again in opposition with the Guild over the proposed private Bill vesting in the hands of the council the franchise of the fair. The Bill received Royal Assent and from 1924 until 1940 the "Three King's Piece" became the venue for the fair. The fair continued on this site despite an eight year interruption during the Second World War and by the 1950s the ceremonial opening of the event on the front of Tom Norman's show was as lavish as the attractions on offer at the fair itself.

By the 1970s the showmen and the franchise holders, which had passed to the London Borough of Merton, were once again in conflict and in 1974 no official fair was presented. It was not until 1983 that the annual festivities returned on August 12th when John Biddall was appointed the agent by the Merton Borough Council. The tradition of the golden key was once again introduced and the formal opening took place at Three King's Piece, Mitcham Common. Over the past decade hostilities between the Council and the showmen appear to be have ceased and JBR Promotions a consortium comprising Jimmy Botton, Bobby Remblance and Robert Birch, acted as the agents for the fair in 1996.