Mitchell & Kenyon and the Showmen 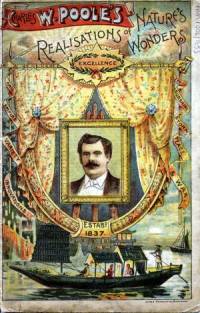 Mitchell & Kenyon worked with the travelling showmen in a variety of ways. They either developed and printed material for individual companies, sold films outright through trade newspapers or were commissioned by town hall and a variety of fairground showmen to make individual films for showing at local venues.

A film programme could consist of fifteen minutes on a fairground cinematograph show, a ten minute presentation within a music hall setting or a two hour stand alone cinema show in a town or civic hall. The Mitchell & Kenyon films acquired by the (bfi) in 2000 are representative of these three types of functions, with approximately forty exhibitors associated with the company. These include A.D. Thomas, who presented films under the banner of Edison-Thomas Pictures, New Century Pictures under the ownership of Sydney Carter, the Poole Brothers of Poole's Myiorama, Ralph Pringle of the North American Animated Photo Company and George Green. Their geographical range encompassed the North and North West of England, Glasgow and Dundee in Scotland, North Wales, the Midlands and Bristol and Plymouth in the South West, with the largest percentage of titles relating to Lancashire and Yorkshire. John Bird wrote in Cinema Parade:

‘Hundreds of those early picture shows excited crowds on fairgrounds, in empty shop, in town halls, temperance rooms and music halls. And when the cinema came, the manager was often a blend of the fairground showman, the travelling theatre proprietor and the panorama lecturer.’ 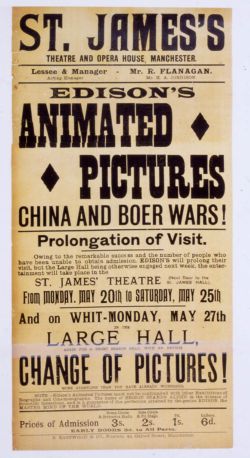 Mitchell and Kenyon's association with travelling fairground showmen may have started through James Kenyon's Penny-in-the-Slot machine business, which he still advertised in the Showman's Year Book until 1902. The most obvious fairground showman connected with Mitchell and Kenyon is George Green who became one of the most successful cinema proprietors in Scotland before World War One. Striking films connected with the fairground cinema shows include M&K 181-2: Opening of Accrington Electric Trams (1907) with footage of the manager for Relph and Pedley positioning himself in front of the camera with his advertising board on five occasions. Other fairground showmen connected with Mitchell & Kenyon include Pat Collins, 'King of Showmen' who exhibited films in Chester, Rotherham and Knutsford from his base in the Midlands and exhibited them in his "Wonderland" Cinematograph show.

Mitchell & Kenyon's association with Ralph Pringle can be traced back to 1900 when he worked as a manager for the Thomas-Edison Animated Picture Company in Newcastle. However, by 1901 he became involved with Moss, Stoll and Thornton, the music hall proprietors and exhibited as the North American Animated Photo Company. Pringle's involvement with Mitchell and Kenyon was not only extensive but lasted longer than any of his contemporaries. Between 1901 to 1907 he commissioned a range of non-fiction films of local scenes that were shown whenever possible in the same evening. Of the 800 films in the Mitchell and Kenyon Collection, approximately 170 titles were commissioned by Pringle, making his associated material the largest related to one individual company within the Collection. The Company presented film shows throughout the United Kingdom and Ireland including, Belfast, Liverpool, Edinburgh, Newcastle, Sunderland, Leeds, Northampton, Bristol, Rotherham, Sheffield and Chester. One of their most innovative titles commissioned by Ralph Pringle was the Arrest of Goudie (1901) in Liverpool. The film was shot incorporating the actual crime locations and depicts the arrest of Thomas Goudie, an employee of the Bank of Liverpool who embezzled £170,000 to pay of his gambling debts. It was exhibited three days after Goudie's arrest in December at the Prince of Wales Theatre in Liverpool.

Arthur Duncan Thomas is perhaps one of most outrageous of all the showmen connected with the Mitchell & Kenyon Collection. Appearing in a variety of venues and guises and advertising under a wide range of names - he was not only a rogue who masqueraded as Thomas Edison but also one of the greatest cinematographic exhibitors in the Edwardian period. In 1899 Thomas presented film shows as part of a cine-variety show where the films were one of many acts on a music hall programme. However, by 1900 he was firmly based in Manchester and presented two hour stand alone film shows in town hall and civic venues throughout the North of England. The early music hall venues include the Brighton Alhambra, the Argyle Theatre in Birkenhead and the Winter Gardens Theatre in Morecambe. Other music hall showmen associated with Mitchell & Kenyon include Thomas Barrasford, owner of the Tivoli Music Hall in Leeds. In 1899 he expanded his operations and purchased the ailing Leeds Tivoli Music Hall and transformed it into a 'little gold-mine' by presenting twice nightly performances. He began presenting film shows in the music hall in 1900 and is credited with patenting the 'Barrascope' with a Leeds cinematographer Owen Brooks, who, with assistance from engineer Borland, put the machine on the market. His involvement with Mitchell and Kenyon dates from 1902 when he used their services to prepare films of Leeds Athletic and Cycling Club and the Leeds Lifeboat Procession together with the ensuing water sports at Roundhay Park. These were advertised as showing on the 'Viagraph'.