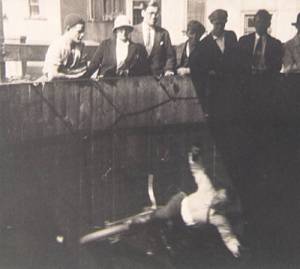 The Globe of Death comprises an enclosed mesh globe around which one or two performers ride around the side and almost vertically over the top on motorcycles.

From the 1930s until the early 1970s they enjoyed a period of immense popularity and all of the major fairs would have had at least one Wall of Death as part of the overall attractions. There is no evidence as to when the Globe of Death first appeared but it is generally thought to have been around the same time or possibly even slightly before the wall. Many different stunts were tried - it was quite common for a lion to be taken on the wall in a side car while bears and monkeys would also be featured. The Austin Seven motor car was also adapted for riding on the wall and specially made Go-Karts were, and indeed still are, used.

There are only three Walls of Death in the United Kingdom today, and these are travelled by Graham Crispey, Ken Fox and Allan Ford. A typical performance comprises four or five separate events including straight wall riding, dipping and diving, the rider coming within inches of the safety wire with the rear wheel, a demonstration of Go-Karting, a demonstration of trick riding, and finally the Hell Riders Race, with two or sometimes even three riders on the wall at the same time.