Autonomous Sensory Meridian Response (ASMR) – the relaxing ‘brain tingles’ experienced by some people in response to specific triggers, such as whispering, tapping and slow hand movements – may have benefits for both mental and physical health, according to new research.

In the first study of its kind into the physiological underpinnings of ASMR, researchers from the University of Sheffield and Manchester Metropolitan University found that those who experience the phenomenon had significantly reduced heart rates while watching ASMR videos compared to people who do not experience ASMR.

ASMR is the sensation experienced by some people in response to specific sights and sounds, described as a warm, tingling and pleasant sensation starting at the crown of the head and spreading down the body. The ‘tingles’ – sometimes described as ‘brain tingles’ or ‘brain orgasms’ – are typically accompanied by feelings of calm and relaxation.

There are more than 13 million ASMR videos on YouTube – including medical examinations, haircuts and massages and folding towel tutorials – which people watch to relax, relieve stress or sleep better. However, while there has been research into other similar experiences such as awe and music-induced chills, research into ASMR has been limited.

Dr Giulia Poerio, of the University of Sheffield’s Department of Psychology, said: “Lots of people report experiencing ASMR since childhood and awareness of the sensation has risen dramatically over the past decade due to internet sites such as YouTube and Reddit.

“However, ASMR has gone virtually unnoticed in scientific research which is why we wanted to examine whether watching ASMR videos reliably produces feelings of relaxation and accompanying changes in the body – such as decreased heart rate.”

Our studies show that ASMR videos do indeed have the relaxing effect anecdotally reported by experiencers – but only in people who experience the feeling.

Researchers from the University of Sheffield’s Department of Psychology investigated whether ASMR is a reliable and physiologically-rooted experience with the potential to benefit the physical and mental health of those who experience it.

In one experiment, they studied the physiological changes that occurred when participants watched two different ASMR videos and one control (non-ASMR) video in a laboratory setting. Half of those who took part in the study were recruited because they identified as experiencing ASMR, with the other half were recruited as age and gender matched controls who did not experience ASMR.

The study found that those who experience ASMR showed significantly greater reductions in their heart rates when watching ASMR videos (an average decrease of 3.14 beats per minute) compared to those who do not. They also showed significant increases in positive emotions including relaxation and feelings of social connection. 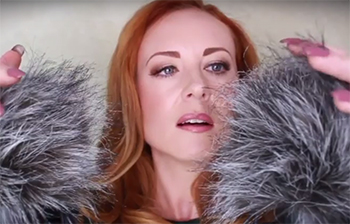 Dr Poerio said: “Our studies show that ASMR videos do indeed have the relaxing effect anecdotally reported by experiencers – but only in people who experience the feeling. This was reflected in ASMR participants’ self-reported feelings and objective reductions in their heart rates compared to non-ASMR participants. What’s interesting is that the average reductions in heart rate experienced by our ASMR participants was comparable to other research findings on the physiological effects of stress-reduction techniques such as music and mindfulness. “

In another experiment, over 1,000 participants filled in an online survey after watching a selection of ASMR and control (non-ASMR) video clips, stating how frequently they experienced ‘tingles’ and their emotional response to each video. Those who experience ASMR were also asked also answered questions about their common ASMR triggers and general experiences of ASMR.

Dr Tom Hostler, Lecturer in Psychology at Manchester Metropolitan University, said: "The online study found that people who get ASMR reported feeling both more excited and more calm, as well as less stressed and less sad after watching ASMR videos, compared to people who don’t get ASMR.

“It has been widely anecdotally reported that ASMR helps people to relax, but ours is the first published experiment to show these changes in emotion. We also showed that it wasn’t just watching videos in general that had this effect, as ASMR participants didn’t respond to the ‘control’ videos we showed them in the same way."

The paper ‘More than a feeling: Autonomous sensory meridian response (ASMR) is characterized by reliable changes in affect and physiology’ has been published in the journal PLOS One.

Read the paper in PLOS One