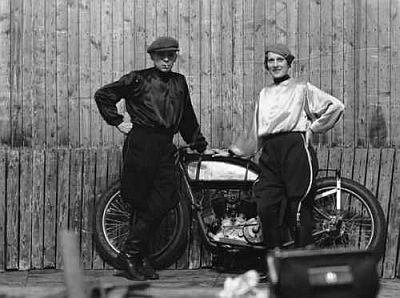 Scope: This collection contains digital scans of black and white photographs from Alma and Skid Skinner, Wall of Death riders, highlighting their travels mainly in Norway and Sweden and featuring other acts of that era. Also scans of the Crown Prince of Sweden opening their show in 1936 and staff working at Butlins, Skegness.

Administrative / biographical history: Alma 'Dare Devil' Skinner (née Johnson) worked working at Butlin's in Skegness when a wall-of-death show was brought in to entertain the visitors. Eager to earn more money, she became proficient as a stunt rider in just two weeks becoming quite a novelty as a female rider.

The outbreak of the Second World War brought her career to an end, although she continued riding motorbikes until the age of 80.

Skid Skinner was killed in a hunting accident in 1944. 'Dare Devil' Alma Skinner/Johnson passed away in 2008, a fascinating person with a rich history of stories and photographs depicting her life and times as a Wall of Death rider with partner 'Skid' Skinner. Her pictures capture the maverick and intensely stylish nature of the individuals attracted to this dangerous and glamorous past-time. Many of the riders came from the emerging dirt-track and speedway scenes of the 1930s, full of daring stories of speed and calamity. The individuals were allowed to flourish on the Wall of Death, elaborating their personas equipped with lavish costumes and a bundle of the latest tricks up their sleeves.

This first collection of images shows Alma's time at Scarborough, resident at the town's 'drome' and quickly settling herself as a character about town. Alma was a remarkably strong, fearless and bold person who felt no discomfort in a world populated by dashing male riders.

Related Collections: Billy Bellhouse
Source: Donated by Alma Skinner
System of arrangement: Catalogued by type
Subjects: Wall of Death, Fairgrounds, Travelling Entertainment, Performers, Family Collections, Speciality Acts
Conditions of access: Items are available to view by appointment in the NFA reading room
Restrictions: none
Copyright: Copies may be supplied or produced at the discretion of the National Fairground Archive, subject to copyright law and the condition of the material
Finding aids: Photographs are available on NFA Digital. Online finding aid available here