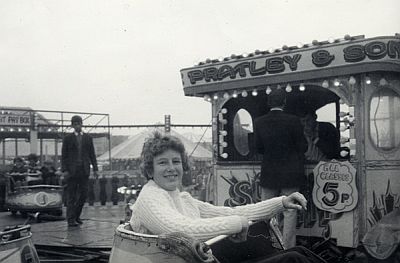 Scope: This collection contains photographs both taken and collected by Paul Angel, associated notes, newspaper cuttings and 2 videos relating to active fairs, seaside and amusement parks and the preservation movement.

Administrative / biographical history: : Paul Angel was a fairground enthusiast who photographed rides and views of fairgrounds from his Herefordshire base. Initially, Paul focused on the South Wales area but by the 1970s he started to cover other fairgrounds such as Tewkesbury Mop, Worcester, Rhyl, Oxford and further afield.

He had a deep interest in platform rides and his collection details of the spread, change and demise of the ride from the 1970s onwards. Paul had a career as a signwriter and many of his photographs show this interest.
Paul's later interests were in the preservation and restoration of vintage arcade machines which is reflected in his collection. He spent a great deal of time restoring the artwork on old machines and stalls as well as painting original artwork on all types of equipment.

Paul Angel was instrumental in setting up the Fairground Association of Great Britain (FAGB) and was an active contributor to their magazine 'The Fairground Mercury.' Paul also had a long spell writing for the World's Fair.