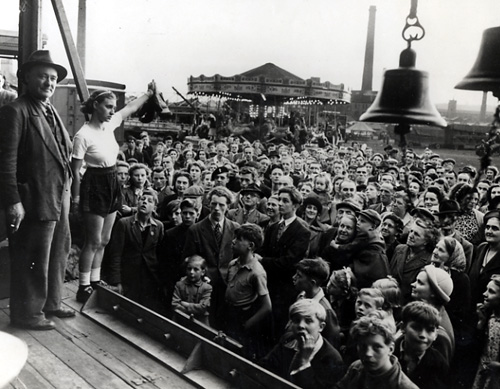 Administrative / biographical history: Barbara Buttrick ‘The Mighty Atom of the Ring’ was born in Cottingham, Yorkshire, in 1930.

Barbara started on the fairground booths and boxed with Professor Bosco and Sam McKeowen. Buttrick boxed as a 98-pound flyweight and was only four foot eleven inches in height. She was inspired to fight after hearing about the exploits of Polly Fairclough in the Sunday Despatch in the 1940s.

In 1954, Barbara wrote to the World’s Fair detailing her career on the booths:
‘It was reading about Polly Fairclough some years ago that first inspired me to take up boxing as my profession. I made my first appearance on the fairground at Epsom on derby day, in 1949, in Tommy Wood’s booth, and later that year I travelled in the West country with Sam McKeowen’s show, issuing a challenge to any girl in the crowd and giving three-round exhibitions. During the past few years I have given about 1,000 boxing exhibitions on the fairgrounds of England, France and America and none of my challengers have yet stayed the distance to collect their prize money.’

In 1950 Barbara was touring for a season with Professor Boscoe Boxing and Wresting Show in Yorkshire. During their time at Dewsbury the local Mayor objected to a planned fight between Barbara and a woman fighter from Germany. The publicity attracted great public interest and the show was sold out. However, the challenger failed to show up but Barbara writes that the publicity resulted in challenges being issued from the crowd.

After travelling with the booths she went on to America in 1953 and joined an Athletic Show which travelled the Midways with a carnival, playing in Kansas, Indiana and Missouri. In 1954, Buttrick started fighting competitive bouts rather than exhibition matches becoming one of the most famous women boxers of all time and the first female boxer to have her fight broadcast on national television.