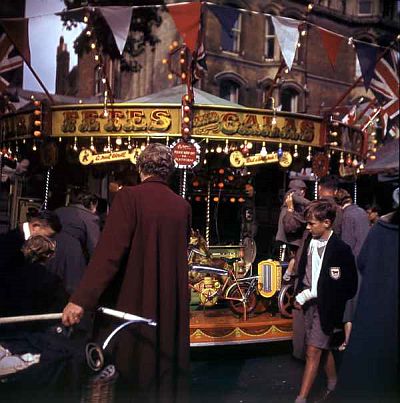 Administrative / biographical history: Lionel Bathe was part of the dedicated group of fairground and steam enthusiasts who grew up and attended the fairs and rallies around the Bristol and Gloucestershire region.
Lionel’s work developed mainly around his favourite fairs of Oxford St. Giles, Bridgwater St. Matthews, Gloucester and Cheltenham, although he also took regular trips to South Wales, to Southsea and photographed the Festival of Britain and associated Battersea fun fair.

The prints reflect not only the machines of the era, but also a way of life. Lionel was close to many showmen and his collection includes many personal images. He also photographed some of the circuses visiting the region and documented the very first traction engine rallies as the steam preservation movement began to develop.
Lionel was very meticulous with his note taking and indexing and always willing to loan out prints to friends and publications.

Lionel was the son of a photographer which gave him the opportunity to experiment with early forms of colour film. Thus much of his work was primarily produced in colour, at a time when this was not the norm. Subsequently his photographs may appear to be later than they are.