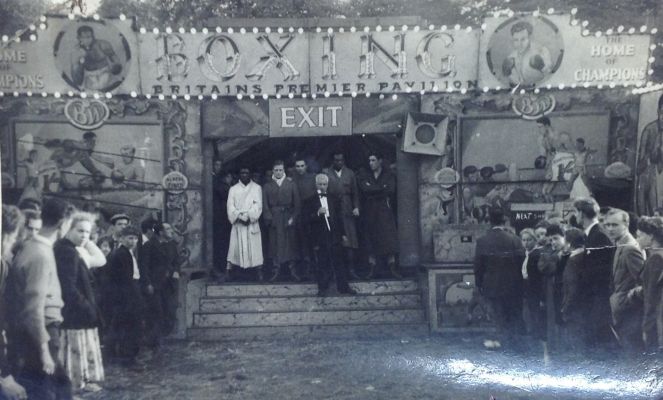 Billy also known as ‘The Cock of the North’ came from a family of fighters. His grandfather was a bare knuckle fighter in the north of England and his father, Billy Wood senior and mother Sarah travelled a boxing booth around the fairgrounds of Scotland. Billy had four brothers, all of which followed their family’s footsteps into the boxing business, and two sisters, who are thought to have also found a career in boxing on the fairground.

Boxing booths were a feature of British fairs from the 1600s to the 1970s. Before boxing was organised and regulated by the British Boxing Board of Control, fairgrounds provided an ideal ground for breading and training champions.

Billy was introduced to boxing from birth and held his first public fighting engagements in his father’s booth aged 9. The fights consisted of orchestrated bouts with a 25 year old man who was Billy’s height, and were part of his formation as a professional boxer. Seven years later Billy presented his first ring at the Durham Miners’ Gala. The show used to run for eighteen hours during which Billy and other boxers challenged members of the public to fight them in the ring for a cash prize. All challenges had to be accepted and the contender had to last three rounds to get his prize. Although the boxers did not make a lot of money in this line of work, they used these fights to gain invaluable experience with a wide range of opponents.

Outside the fairground season, Billy continued pursued his career as a boxer, fighting in different venues around Scotland.
From 1926, Billy started to travel an impressive booth he had especially made by a company based in Ireland. The frontage was painted by the Orton and Spooner Company, on one side they recreated Billy’s famous fight with Kid Shepherd and on the other Larry Cain’s fight with Phil Scott.

Billy continued travelling his booth around Scotland, while pursuing his boxing career at the same time. He became an accomplished fighter and in 1929 he was crowned Featherweight Champion of Scotland. He also found success travelling his boxing booth and became a respected and well-known boxing and wrestling promoter.

In 1929 Billy moved south into the English fairgrounds, where he travelled his booth extensively around a wide spread of counties, including Cambridgeshire, Bedfordshire and Derbyshire and became a regular at the Goose Fair.

Billy retired from boxing in 1938, aged 35 and focused on the promotion of fights and running his boxing booth for the rest of his career. He continued travelling his show with his sons David and Jim until 1974 when it appeared at the Nottingham Goose Fair for the last time. By this time boxing booths had gradually started to disappear from the fairground due to changing social attitudes and the ever increasing restrictions imposed by the British Boxing Board of Control.

Billy Wood’s boxing booth can be found in the Dingles Fairground Heritage collection in Devon. www.fairground-heritage.org.uk/