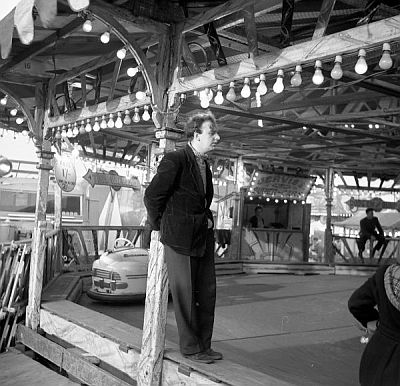 Scope: This collection contains photographs taken by David Braithwaite from the 1950s and used towards his publications alongside older images collected from other sources as well as business records, monographs, articles, correspondence, newspaper cuttings, advertising material, bibliographies, catalogues, programmes, films and some other miscellaneous items.

David Julius Braithwaite was born in Luton, Bedfordshire on the 6th of October 1932. The family moved to Northampton and as a young boy David was fascinated by the fairs which visited the town and thus began his lifelong interest and passion with the travelling fairground. He often helped with the building up of the rides and got to know some of the showmen.

David went to Northampton Grammar School where he developed art and drawing as his favourite subjects. He entered the Architectural Association School at 17 and his subsequent career in architecture included work in various practices, teaching at Leicester, Hammersmith and Kingston School of Architecture and finally establishing his own practice in Knightsbridge, London. Here he worked in domestic, commercial and entertainment fields, including the planning of the Amusement Parks. Projects included the hall of Mirrors at Madame Tussaud’s in London and a floating theatre for children of which he was co-designer. In 1975 he was the prime mover in the rescue of the Savage Company Archives from King’s Lynn.

For many years he collected material for his book Fairground Architecture (the first book of its kind on this subject) which was first published in 1968. He also wrote a book on Frederick Savage of King’s Lynn, a booklet for Shire Publications and Building in the Blood, the history of the building firm, Dove Brothers.
During the 1970's he acquired the Orton and Spooner Archive which formed the basis of a book he was preparing to write at the time of his untimely death on July 4th 1982.