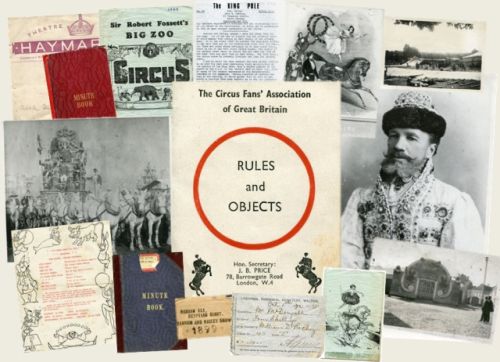 Scope: This collection consists of a large library of books and journals, as well as archival material including posters, programmes, photographs, films, handbills, research material, scrapbooks, original artwork and many other items of ephemera relating to British, Irish and European circuses.

Administrative / biographical history: This collection consists of two distinctive areas, the Library which was donated in 2002 and the Archive which was donated in 2016. The Circus Friends Association (CFA), library is the largest circus book collection in the UK, comprising over 1,000 volumes. The CFA archive contains thousands of posters, photographs and other items of ephemera, compiling a wealth of circus history from the 1800s to today.

The CFA, formerly known as the Circus Fans Association was stablished on Saturday 20th January 1934 in the ring of Bertram Mills Circus at Olympia, London by a group of enthusiasts. The CFA’s purpose remains the same as in its conception; to stimulate, foster and promote enthusiasm for circus and related performances as part of British culture.

During 1934, the pattern for CFA activities was established, with the formation of the library, the publication of The Sawdust Ring magazine and the first rallies, including ones to the Hippodrome Circus in Great Yarmouth and Blackpool Tower. The annual subscription at the time was one guinea for residents in a radius of 60 miles from London 'as defined by Automobile Association handbook', and half a guinea for those residing outside that area, in the provinces. 'For residents in the Colonies and foreign counties' the subscription was 7/6.

The first President of the CFA was Lady Eleanor Smith (1902-1945), the eldest child of the politician F. E. Smith. Lady Eleanor Smith was an author, a society reporter and cinema reviewer and worked as a publicist for circus companies.

The first five years of the CFA saw the firm establishment of the Association its activity, although it was active by Alfred 'Dickey' Bird. The post-war years were difficult but the CFA continued operating with the same aims and ambitions.

The library was started in 1937, as a gift of 30 books from A.C. McLachlan. Others titles were acquired by purchase or donation. It contains books on virtually every aspect of circus life from individual acts, to acts of Parliament, from erecting a Big Top, to the logistics of transporting circuses, works of fiction, photography and juvenile literature all of which help to create a greater understanding of the many contrasts in circus life; of the romance, tragedy, spectacle and hardships.

Notable authors who have contributed to the myth and legend of circus include Lady Eleanor Smith, who in 1945, donated all her circus books to the CFA, Ruth Manning-Sanders and Courtney Ryley Cooper, an American writer who, after having first joined a circus aged 16, went on to write crime books and ghost-wrote articles under J. Edgar Hoover’s name in the 1930s.

After the war lists of holdings were printed and distributed to members, who could borrow a book at a time by post. By the mid 1970s, the ‘Library Catalogue’ listed 525 books and a ‘Circusiana’ section was created for valuable books, for reference only.

The CFA continues maintaining the collection, ensuring its growth and establishing it as the primary, national collection of books on circus.

The CFA has also amassed one of the most fascinating and important collection of circus related material in the United Kingdom expanding over 200 years. This material has supported research and literature produced by its members over the years and has ensured that an important part of British circus history will be available for future generations of researchers and enthusiasts.

The association has always welcomed enthusiasts and circus artistes to it’s membership and has always produced a regular publication giving news, reviews and articles on circus artistes and personalities and reviews of British and foreign circuses. The current quarterly magazine King Pole, named after the masts, which support a circus tent, is regarded as one of the leading circus periodicals in the world.

The CFA continues to organise visits, formerly called rallies, for the members, to UK circuses and recognises the achievements of those involved in circus with special awards.

After almost 85 years in existence the CFA continues to flourish with membership being maintained in the region of 500 comprising both British and foreign subscribers www.circusfriends.co.uk/