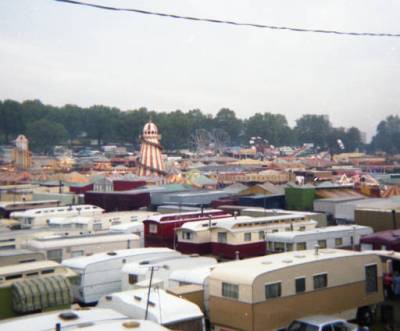 Administrative / biographical history: David John Skidmore was born on 22 September 1951 in Nottingham. From a very early age he was taken to visit the Goose Fair and travelling circuses that visited the city on family days out. This sparked his interest in fairground rides and model building. Initially, he experimented with Meccano, but the results didn’t measure to his expectations. Although disappointed, he didn’t give up on what would become a lifelong passion. In order to better understand the workings of the rides and improve his models, Dave started to pay regular visits to travelling fairs and take photographs. When he was around 12 years old, his father took him to his first model show. The sight of mini-models of fairground rides made a big impact on Dave and encouraged him to start to build his first working model. Many attempts later and still unsatisfied with the results, he decided to continue building his own reference collection of photographs of rides. Overtime, Dave became an accomplished modeller and eager fairground enthusiast and collected a rich documentary collection of photographs of fairs in the UK from the 1970s onwards around Lincolnshire, Lancashire, Yorkshire, Derbyshire and Nottinghamshire.

Dave has been a member of the Fairground Society and the Fairground Association of Great Britain for many years and over time he has created friendships with fairground families and showpeople and even got involved in collecting newly acquired rides with them straight from the manufacturers.

Related Collections:
Source: Donated by Dave Skidmore
System of arrangement: Catalogued according to type
Subjects: Fairgrounds, Fairground Rides, Fairground Art, Travelling Entertainment, Transport
Conditions of access: Items are available to view by appointment in the NFA reading room
Restrictions: None
Copyright: Copies may be supplied or produced at the discretion of National Fairground Archive, subject to copyright law and condition of the material.
Finding aids: Photographs available on NFA Digital