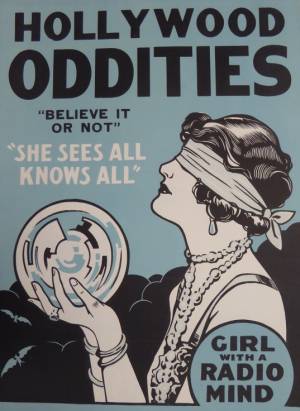 Scope: This collection contains a small number of sideshow and freak show posters from America mainly from the Ripley’s ‘Believe it or Not’ franchise.

Administrative / biographical history: The Enquirer Printing Co. was a company based in Cincinnati, serving the flourishing Victorian entertainment industry. During the late nineteenth and early twentieth centuries, Cincinnati became the epicentre for show business printing in America and the base of some of the most important printing houses of the time. The city attracted masterful artist and printmakers, and showmen from all branches of the industry who were eager to work with them to bring their design vision to life. The Enquirer was one of these pioneering companies, which paved the way to what became the great days of circus posters between 1880 and 1930.

The company was first known as the Enquirer Job Printing Co. of Cincinnati, a branch of the Cincinnati Enquirer Newspaper. At the time, newspapers used their printing presses to produce a myriad of products such as posters, calendars and stationery in order to increase the profitability of their business. The term Job Printing was used to indicate this alternative commercial activity.

In 1867 this section of the newspaper was purchased by a society formed by A. O. Russell, Robert J. Morgan, James M. Armstrong and the showman John F. Robinson. Together they formed the Russell, Morgan & Co. printing company. Robison and Armstrong provided the financial support while Russell and Morgan, who were printmakers, run the business.

Initially, the company focused in the supply of the entertainment industry, producing theatrical and circus prints. After relocating to larger premises in 1872 they decided to expand into the manufacturing of playing cards and by 1891 driven by the success of this side of the business the two printing sections were separated. Three years later they formed The United States Playing Card Company, which to this day is the largest manufacturer of playing cards in the world.

In 1895 Harry J. Anderson bought the Job Printing Company to stablish The Enquirer Printing Co. which has been owned by the Anderson family ever since.

The Enquirer’s strength was in its fine design and use of rich colours. Under the management of Harry Anderson, the company continued to invest in fine artists and develop the visual appeal of its products. The printing techniques evolved over time from wood block to stone lithography to automated rotary presses, which were better suited to supply the quick turnaround and volume of products demanded by their clientele.

Although they produced posters of every conceivable size, Enquirer is best known for the epic sized billboards they created for Buffalo Bill’s Wild West. One of the largest posters they produced was a 168 sheet mammoth poster consisting of opening and signature panels with text and over 100 pictorial sheets depicting scenes of the Wild West in 1899.

The Andersons worked closely with the showmen and even owned rights to some of their equipment. They often attended their shows and kept up to date with any changes, additions and novelties. Amongst their clientele were around 38 key American circuses including Al G. Kelly & Miller Bros., Carson & Barns and Clyde Beatty-Cole Bros. They printed posters for touring companies that offered musical revues, vaudeville, minstrel shows, and a few dramatic productions, covering a wide thematic range.

In 1902 The Enquirer Job Printing Company became a member of The United States Printing Company, also known as The Consolidated lithograph Co., a newly formed printers association supporting the rights of printing companies as a result of litigations arriving from copyright legislation. The association was formed by some of the biggest companies at the time and controlled most of the theatre and circus bill printing market in the United States.

The Enquirer was a market leader from its inception, renowned for the quality of its early wood block plates and in the early 1950s it became the only show printer in the Midwest.

At a time when printed material was the only means of advertising for the showmen and the posters had to provide a visual description of the performance, the Enquirer provided creative and innovative designs, full of colour, movement and expression, which allowed artists and printmakers to shine through. The detail of the work produced at the Enquirer’s presses is remarkable and contributes to the visual description of performers and acts, some of which have been obscured by the pass of time, these poster being one of the only records in existence.

The Enquirer Printing Company still exists under the direction of the founder’s grandson, Mr Harry Anderson and continues to print largely circus posters.

Ripley’s Believe it or Not!

Leroy Robert Ripley was born on 22nd February 1890 in Santa Rosa, California. Robert Ripley, as he was known, was a very successful American cartoonist, entrepreneur and amateur anthropologist, known for creating Ripley's Believe It or Not! newspaper panel series and radio and television shows which feature odd facts and the bizarre and strange from around the world. During the 1930s he hosted a series of Believe It or Not! theatrical short films for Warner Bros. Pictures & Vitaphone.

In 1933 Ripley opened his first museum in Chicago, the ‘Odditorium’. The concept was so success that successive Odditoriums opened in San Diego, Dallas, Cleveland, San Francisco, and New York City. During this time Ripley was voted the most popular man in America by the New York Times and received an honorary degree from Dartmouth College.

In 1948, the year of the 20th anniversary of the Believe it or Not! cartoon series, the radio show was replaced with a television series. Ripley completed only thirteen episodes before he died of a heart attack on 27 May 1949 at the age of 58.