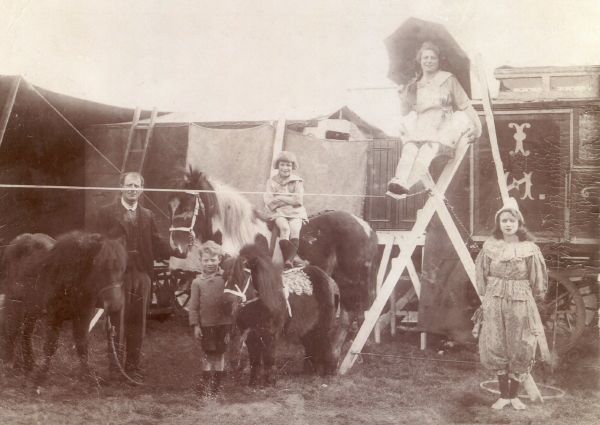 Ref: NFA0144
Title: The Harry Paulo Family Collection
Scope: This collection contains black and white photographs, postcards and negatives, newspaper cuttings, scrapbooks, posters, programmes, books and other miscellaneous items related to the Paulo Circus family. Other circuses and performers are also represented.
Dates: 1921-2000
Level: Fonds
Extent: 481 photographs, postcards and negatives, 15 posters and 3 boxes
Name of creator: The Harry Paulo Family
Administrative / biographical history: Harry Paulo (1916-1996) was born into one of Britain’s oldest and most prestigious circus families, with a long tradition of circus showmen and equestrian performers. He was an all-round circus artiste, a proficient bareback rider, trapeze artist, aerialist, tightrope walker and clown. He was best known for two acts he performed with his family; the aerial act known as ‘Rio, Ron and Rita’ or ‘The 3 Paulos’, which he presented with various members of his family at different times and ‘Harry and Betty Paulo’ or ‘Betty and her Foolish Partner’, a famous clowning tight wire act performed with his wife Betty.

The Paulo family originated with the union of Henry Butcher and Caroline Baker, better known as Madame Blondin.

Madame Blondin performed as the female Blondin in the 1860s and famously got into difficulties on the high wire at Bolton while performing with Pablo Fanque’s circus in 1869, while Henry was a traveling showman, probably working on the fairgrounds. Henry and Caroline had several children, including; Frank ‘Frisco’ (d.1928-9), Thomas (c.1863-1933), Harry (senior) (1875-1941), George, Elizabeth (c.1876-1930) and Caroline Maud. Most of the Paulo family have been involved in the circus business from these early days and over the years different members have travelled a number of circuses under various names including; Riskit Brothers Circus, Reaney’s Circus, Reco Brothers Circus, Tom Paulo’s Circus and more recently Gilbert and Paulo’s Circus.

The most significant strains to the Paulo family are Frank’s family and Harry’s family, although Thomas also achieved fame around Ireland and Scotland.

Thomas was a clown, a circus proprietor and a showman. His show was noted for adopting modernity, using petrol driven lorries instead of horses and electricity. He also travelled one of the first talking picture shows around Scotland where by 1930 he had two picture houses as well as a circus.

The Paulo’s Circus was founded in Ireland in the early part of the twentieth century and although the business was folded or merged on a couple of occasions a branch of it can still be found travelling the UK today.

At the time of the Paulo Circus inception, the family couldn’t have anticipated that the business would have to survive two major bellicose conflicts which would change the face of Europe. In 1914 at the outbreak of WWI life was interrupted, men were conscripted around the country and resources were redirected to the war effort including circus animals and transport. Frank Frisco was recruited to serve in France and didn’t join the family and the show again until the end of the war. He died of pneumonia in 1928-29 in Rotherham while on his way to St. Austell to merge his circus with the Anderton and Rowland Show. This was not to be the end of the Paulo Circus though, as in 1939 Frank’s widow and her children reformed the family circus and prospered through the WWII years taking morale boosting entertainment around the country. They continued running the Paulo Circus until finally folding it in 1949. It wasn’t until 1983 when another member of the family; Clara Paulo, the seventh child of Frank and Clara, and her husband Ken McManus decided to reinstate the Paulo Circus.

Harry (senior) was an equestrian and a clown who performed in Britain and the Irish Republic. Harry married Florence Turner, a performer from a fairground family and they had four children; Emily, Grace, Harry (1916-1996) and Reginald ‘Reggie’ (1921-1989).

Emily became a female clown and married Tom Reaney. Tom’s mother was Emma Reaney (d.1950), a circus equestrienne from the Marshall family of showmen from Yorkshire. He was a clown himself, known as Tomato, who was performing with partner Rabbit as early as 1919 with Bostock’s Circus. Together they formed the Reaney’s Family Circus and had five children; Ruth (b.1936), Florence, Tommy, Bettina and Gary. All their children followed their parents’ footsteps into circus performing as equestrians, wire walkers, rope spinners and jugglers.

Grace was an equestrian performer and married Ralph Barnsley, who although from a mining background, spent some time working in the circus. They had two sons; Roy and James (Jimmy).

Reggie, was an equestrian and clown. By the age of thirteen he was riding on his father’s circus as ‘Boy Paulo’ and made his debut as a clown with Chapman’s Circus in 1938. Reggie married Cicine Bohm and together they formed the Krasters as well as performing a trapeze act as the Trevals. They rode as part of a larger group and also performed a duo trapeze act as ‘The Two Trevals’. They had a son Trevor Allan (b.1951).

Harry (1916-1996) showed signs of having inherited his family’s equestrian talents at an early age and began his professional career in the circus in a bareback riding act at the tender age of six. In the 1928-1929 season, age only 12, Harry joined the Bertram Mills circus at Olympia, where national and international talent was developed. Harry featured in Bertram Mills’ programme as his protégé and latest discovery under the name ‘Young Paulo’ wearing the colours of the Earl of Lonsdale who was president of the circus. A year later he appeared with the Bertram Mills show at Belle Vue, Manchester. In the years building up to WWII Harry worked at Chapman’s Circus with his brother Reggie in a riding act and it was here that he branched out into the trapeze. During his long career, Harry worked with some of the biggest British circus names of the twentieth century, including Chipperfield, Robert Bros, Fossetts, Lord George Sanger and at the Great Yarmouth Hippodrome. He could also often be found on variety bills.

Harry married Mary Elizabeth Sarah McCandless, ‘Betty’ (1915-1992). Betty wasn’t from a circus background but was a dancer and will become a wire walker performing under the name of ‘Bettina’. They had four children; Ronald Edward ‘Ronnie’ (1935-2015), Elizabeth Charmain ‘Betty’ (b.1940), Violetta Florence ‘Tina’ (b.1944) and Rosita Pauline (b.1947). Except for Rosita, who chose a career in teaching, the rest of the children continued the family tradition in the circus.

Tina married Carlos Rosaire (b.1940) of the famed Rosaire circus family and together they travelled a trampoline and a snake and crocodile act. Both Tina and Carlos were well rounded performers; Tina performed as Miss Shira with crocodiles and snakes and was a proficient acrobat and aerialist. Carlos also performed with crocodiles and was a trampolinist. They had one son; ‘Count’ Brenton Carlos Matthew (b.1963).

Betty, who was also an aerialist, married Joachim Krause (b. circa1939) a German circus performer. They worked in Europe as ‘The Paulos’ with their trapeze act and as the ‘Ron Ritas’ with their big wheel act until moving to America in 1971. They worked throughout the USA until settling for almost twenty years at Circus, Circus Hotel-Casino in Las Vegas, where Betty became Ringmistress. They had three children; daughters Jacqueline (b.1961) and Heidi (b.1963), both of whom continued the family tradition as aerialists, and son Paulo Krause (b.1981).

Ronnie was a clown and an aerialist. He married Helen Turner (b.1934) after meeting her working in pantomime at Birmingham. They had a daughter; Nicola.

In 1960, after over 40 years of circus career, Harry retired from the circus and settled down in Skegness with Betty. His last performance was at the Derbyshire Miner’s Welfare Holiday Camp at Skegness with the ‘Three Paulos’, an act he performed with Ronnie and Tina and his comedy wire act. Harry and Betty ran an amusement arcade in Skegness for many years. Betty died in 1991 and Harry on 26 June 1996 age 79.