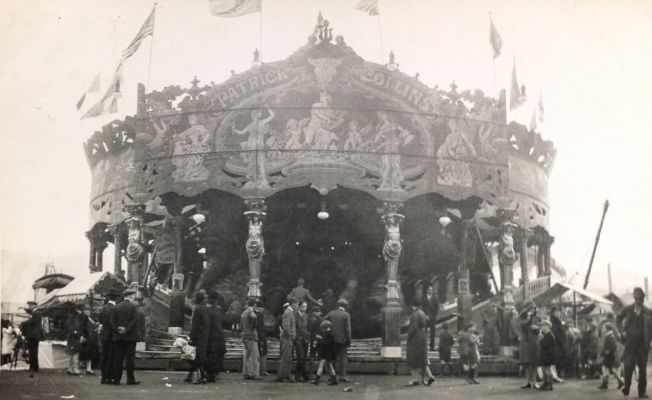 Scope: This collection contains black and white and colour photographs and negatives of fairgrounds, fairground organs, steam engines and other transportation systems with annotations by Jack Wilkinson and other sources, such as William Keating, James Davidson, Philip Bradley and Jack Mellor, as well as notebooks, scrapbooks, journals, books, correspondence, research material, audio tapes of fairground organ music and some 3D items including Jack's recording equipment and a model of a fairground organ. Jack Wilkinson’s photographs represent the Yorkshire region and surrounding areas including Lancashire whereas other images show fairs in the Midlands and the south of the country including Oxfordshire and London.

Administrative / biographical history: Jack Wilkinson (1904-1979) dedicated his life to reporting the fairgrounds in and around Yorkshire between the 1920s and 1970s. He created meticulous photographic records accompanied by detailed indexes, which have become a historic record of the engines that powered the fairgrounds around Britain at the time. His knowledge and dedication gained him a lasting reputation amongst the expert engine and fairground enthusiasts as well as the travelling showmen and their families.

Jack’s love of fairgrounds emerged from his passion for steam engines. He was employed by John Fowler & Sons building engines at their factory in Leeds. This allowed him to develop in-depth technical knowledge, which in turn help him produce accurate, high quality records, making his photographs of steam engines a unique historic record of these machines in the heyday of the steam powered fair.

Aside from his job at Fowlers, Jack worked as a reporter for the World’s Fair newspaper. For over 50 years, he travelled around the fairgrounds of Yorkshire and its vicinity writing weekly articles, which he signed under the pseudonym ‘Cyclist’, a nickname he gained by always cycling between the fairs.

Jack’s photographs cover a period of time of enormous change in British society. On the one hand they capture the inter-war years, when people started to experience increasing levels of freedom and universal suffrage was implemented. Although the economy was relatively stagnant and politics were divided, social culture started to change; church attendance declined sharply while British society developed a taste for leisure activities and holidaying. On the other hand, technological advancement brought about the transition from steam power to diesel and in the case of the fairground; electricity. This will mark one of the most significant moments on the evolution of British fairground history. Finally, the period between 1938 and the 1970s brought a second world war, the demise of the British empire and some of the fastest technological changes ever experienced in human history.

Many of the fairs represented in this collection do not exist anymore, which makes Jack’s records an important witness of lost traditions. His photographs of fairground rides depict both the older generation of steam-powered rides and the new generation of the electrically-driven ones replaced them. Some of his images of Yorkshire hiring fairs are an invaluable record of a culture of entertainment that was central to people’s living and customs and have since drastically changed.

Other interests covered by Jack’s photography were generic engines and locomotives and fairground organs and recordings.