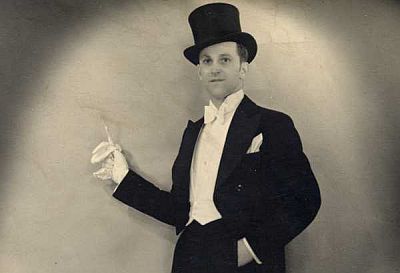 Scope: This collection contains programmes, handbills, photographs and a digital copy of Hamilton Kaye's notebook which contained jokes and stories that Kaye kept for using in his act.

Administrative / biographical history: Born Ronald Kaye on 20 May 1921, he was known as Hamilton Kaye for magic shows and for his magic business. He also used other performing names such as Wizard Kaye, Ron Dalmo and briefly as Milton Kaye.

Ron Kaye was born in Sheffield, at Rock Street, Pitsmoor. His parents were both teachers and his father eventually became head teacher of Hillsborough School. His family moved to Crosspool in the early 1930s, where they bought a newly built semi-detached house for £550 and Ron became a pupil at the newly opened High Storrs School.

At the age of four Ron was taken to see a variety show at the Sheffield Hippodrome. He was startled when 'The Great Carmo' appeared in a flash and ran back up the aisle shouting 'I'm going home'. It was at this point that he fell in love with theatre, music hall and especially with magic. He began performing magic to family and friends, church socials and garden parties as well as other small audiences. He produced plays and organised New Year Dances at Ranmoor Church Hall. During the early years of the war he was a member of the 'Steel City Stars', a group of semi-professional entertainers that performed variety shows in many local venues including Sheffield City Hall.

Later in the war he served in the RAF and was posted to India and Ceylon (now Sri Lanka) where he was a member of ground crew servicing flying boats and bombers. During this time he took part in and produced concert parties for fellow servicemen.

On his return home he worked first in the laboratories at Sheffield University, then for the Sheffield Corporation Water Department, later the Yorkshire Water Authority. He was introduced to his future wife Marion, a nursery nurse, by his cousin Molly. He and Marion were married in 1953 and with their two children the family moved to Dronfield in 1960 where Marion ran a nursery school for many years.

Ron had a lifelong passion for magic and increasingly built a reputation in the local area as a conjuror and children's entertainer. He was a voracious collector of magic and also ran a magic business supplying tricks and his specialty flash paper and string. He was able to concentrate even more on magic when he took early retirement from the Water Authority. In 1982/3 he served as President of the British Ring of the International Brotherhood of Magicians.

Ron actively pursued his passion for magic until a few months before his death attending magic events. Ron passed away on Christmas Day 2006, age 85.

Related collections: Collections of his photographs and memorabilia are held at University of Sheffield and Sheffield Central Library.
Source: Donated by his wife, Marion Kaye
System of arrangement: Items catalogued according to type
Subjects: Magic, Music Hall and Variety, Performers, Fixed Entertainment Venues
Conditions of access: Items are available to view via appointment in the NFA reading room
Restrictions: None
Copyright: Copies may be supplied or produced at the discretion of National Fairground Archive, subject to copyright law and condition of the material
Finding aids: Online finding aids available here