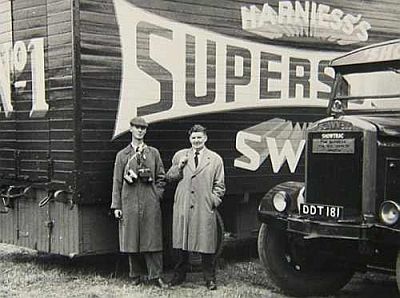 Scope: The Jack Leeson Collection consists of photographs and negatives, both collected and taken by him as well as notebooks with detailed lists of every fair visited. Jack Leeson used an elaborate system of cross-referencing which match the photographs and Jack's account of the fair. Also included are letters, scrapbooks and a collection of records of fairground music and some fairground models.

Administrative / biographical history: Jack Leeson is considered one of the pioneering trio of fairground enthusiasts alongside Rowland Scott and Philip Bradley. This new breed of fairground enthusiasts pulled away from the strict preservation focus of past practices and turned towards the recording of contemporary change at all levels, whether technical, aesthetic or social. Together these three men formed the basis of a new breed of enthusiast interested in the 'here and now' rather than strictly looking to the past. Their detailed and methodical recording practices provide an invaluable resource to generations of researchers.

Jack was born in 1917 and his early years were spent at Long Buckby, Northants, where the amusements of "Flash" George Billings and others had sparked off his lifelong fascination with everything to do with the fairground. He worked as an engineer at Rugby until his retirement in the early eighties. That engineering training resulted in an ability to describe the mechanical principles of riding devices with simple freehand sketches, supported by only a few written words. He married Win and had a daughter, Jacqueline.

His photographic collection provides a record of the fairgrounds around the Midlands and elsewhere over a period of forty years. He used a comparatively simple camera and printed his monochrome negatives meticulously, hand-shading in his enlarger to get good gradation.