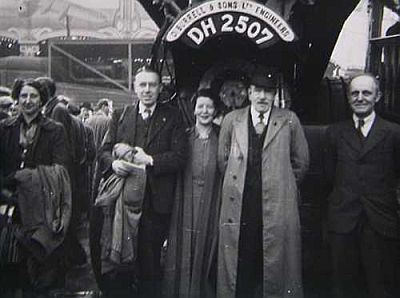 Administrative / biographical history: Fairground enthusiast Cliff Marston was a native of Bishop's Castle, the tiny Shropshire town along the Welsh Marches that was once the country's smallest borough. Bishop's Castle formed part of the chain of fairs along the Marches known as 'the May Run'. His first memories of his home town's May Fair dated from the early years of the twentieth century, when the amusements were presented by the Bristol showman Marshall Hill. His working career was spent in Manchester as an employee of the city's tram and bus company. After retirement he moved to Wrington near Bristol, where he became one of the principal members of the Western Counties Fair Organ Club, a now-defunct association that was set up as an alternative to the Fair Organ Preservation Society. He died in 1978.

Fairground enthusiast Cedric H Conway worked as a bus driver in Manchester. It was in this employment that he was a colleague of Cliff Marston and Rowland Scott, both fellow fairground enthusiasts. He was a member of the Friendship Circle of Showland Fans and, during the 1960s, contributed a series of articles to its magazine ‘The Merry-Go-Round’ under the evocative title of 'The Glow in the Sky'. He joined Cliff Marston in retirement by moving to the West Country, where he died circa 1970.