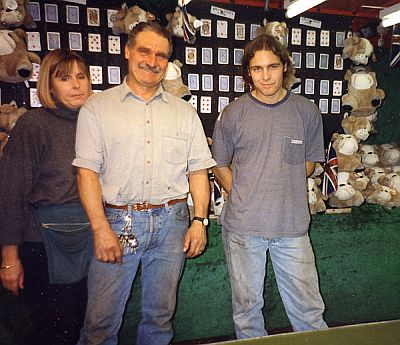 Administrative / biographical history: Harry Russell lived and worked in Oxfordshire. Aside from his job as a postman, he was an avid fan of fairgrounds and preservation, rarely straying from his locality. Harry was a member of the Fairground Association of Great Britain who travelled around the local fairs on his bicycle taking and handing out photographs. He was a prolific photographer who produced an archive of thousands of photographs of fairgrounds which often portrayed his friends and acquaintances. Harry passed away in November 2009 age 89.

Related Collections: Ron Newbold Collection
Source: Donated via Graham Downie and The Fairground Association of Great Britain
System of arrangement: Catalogued according to type
Subjects: Fairgrounds, Steam Preservation, Fairground Rides, Fairground Art, Travelling Entertainment
Conditions of access: Items are currently being catalogued and are not available to researchers at the present time
Restrictions: None
Copyright: Copies may be supplied or produced at the discretion of National Fairground Archive, subject to copyright law
Finding aids: None at present