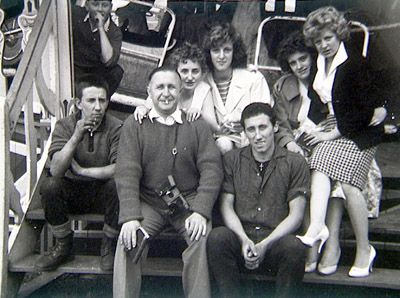 Administrative / biographical history: Rowland Scott (1921-1998) was an avid fairground enthusiast who travelled around the country producing and collecting meticulous records of British fairgrounds. Widely recognised by his fellow enthusiasts, he was one of the first people to start recording and preserving the history of fairgrounds and the showmen.

Rowland was born in 1921 in Manchester, he became interested in fairgrounds when his father took him to the Gorton Wakes Fair aged five. Gorton Wakes originated from the religious festival of the Rushbearings and was held in Peacock Street on the Friday before the first Sunday in September. In these early days and before the fairground enthusiasts organised themselves into any kind of association, Rowland developed a passion for the travelling fairground and started to memorise every detail about the events he attended. Unwittingly, he took the first steps into a lifetime commitment for recording and preserving the history of British fairgrounds and becoming an authority on this field.

As a child, he visited fairgrounds around his native Lancashire including Gorton, Oldham, Harpurhey, Northenden, Hightown, Middleton, and Nelson where the Green Brothers presented a large fair in the 1930s. A regular feature at Gorton and other fairs presented by the Collins family were the ice cream stall and black pea saloon of John Pessagno and Sons, where ice cream wafers and hot black maple peas could be enjoyed for a penny each. Novelty shows in those days were an important ingredient of the fair. Peppered around the rides, visitors could find the boxing booths of Bert Hughes, Len Johnson and Harry ‘Kid’ Furniss, the menageries of Jack Parris and Manders, the wild west shows of the Shufflebottom family and a range of other entertainments accompanied by dazzling fronts, troupes of dancing girls and eloquent ‘barkers’ announcing the shows.

By the time Rowland was 12 years old, he was already an avid reader of the World’s Fairs newspaper, which allowed him to keep up with the latest news from the sector. His passion for the fair took him all over his native Lancashire and neighbouring counties including Nottinghamshire, Yorkshire, Staffordshire, Lincolnshire and Newcastle where he photographed rides, shows and people, capturing the atmosphere and essence of the fairground. Rowland possessed an extraordinary memory, which help him develop an encyclopaedic knowledge of all aspects of the fairground. His ability to recall details and his willingness to share his knowledge with others, gained him the friendship and respect of showmen and fellow enthusiasts alike. Through his lifetime, Rowland acquainted himself with some of the most iconic showmen in British history including Tom Norman, Pat Collins, William Shufflebottom, Walter Holland, Arthur Hibbert, Harry and David Wallis and Laurence Silcock to name a few.

In 1940 the Friendship Circle of Showland Fans (FCSF) was formed by Father Grenville and other enthusiasts. Rowland joined immediately and met likeminded people such as Jack Wilkinson, Cecil Quick, Philip Bradley and Frank Buckley, who often published articles on the society’s magazine, the Merry-Go-Round. This circle of fellow enthusiasts opened up new channels for the exchange of knowledge as well as the recording and preservation of the travelling fairground history under a unified body and identity. Rowland served as the FCSF’s Assistant Secretary from 1953 to 1965. He was responsible for writing a weekly column for the World’s Fair, which was published under the heading FCSF Notes (Northern), while Stuart Johnstone, took care of the (Southern) section. Other contemporary fairground companions were Cliff Marston, Jack Leeson, Arthur Jones and Cedric Conway.

By now however, World War 2 had broken in Europe, which naturally brought a period of quiet to the fairground due to a combination of restrictions implemented by the British Ministry of Defence on the entertainment sector, the requisition of equipment and the enlisting of thousands of showmen and workers. Some of the country’s major fairs were cancelled and the sites used for military operations, while others were running under subdued blackout conditions. Many of the local showmen’s engines were once again requisitioned for war duties including the demolition of air raid damaged buildings in major cities such as Manchester and Liverpool.

Rowland was posted to North Africa where the Division fought in the Tunisian Campaign; from here he was moved to Italy after the Allied invasion of Sicily in 1943 to undertake two brigade sized landings and a mostly diversionary amphibious landing. By December of that year, most of the First Airborne Division had returned to England, where they began preparing for the invasion of Normandy, although eventually they didn’t take part in this battle. In September 1944 the First Airborne were sent to Arnhem in Holland as part of the ‘Operation Market Garden’, to create an Allied invasion route into Northern Germany. The Airborne forces landed some distance from their objective and encountered unexpected resistance. They suffered heavy casualties and many soldiers were taken prisoners, including Rowland. The captured soldiers were moved to Stalag 357, a German prisoner of war camp (POW). Stalag mainly held British and Commonwealth POWs although soldiers from other Allied forces could also be found including; Russian, Polish, Yugoslav, French and American. Up to 17,000 POWs were imprisoned in the camp at the same time causing severe overcrowding. The prisoners endured poor living conditions, sanitation and diet, medical supplies were also scarce and once in the camp their health deteriorated rapidly. In spite of this, most men were forced to do hard labour. Rowland remained in Stalag 357 until the liberation of the camp in April 1945.

After the war, Rowland returned to his work as a bus and tram conductor for the Manchester Corporation, which run the entire net of Municipal transport for the city. He also returned to the fairground, however by this time the fairs were undergoing a period of dramatic change both in structure and fashion, and a surplus of war vehicles sold by the government were finding their way into the fairgrounds and replacing the traction engines.

Rowland met his wife, Elizabeth Higginbottom (b.1928) in 1961 and they married in 1965 at the Parish Church of St. James the Great at Whitfield. After this, his activity on the fairground slowed down, although it never ceased. Between 1982 and 1986 he wrote a series of articles for the Fairground Mercury entitled ‘Lancashire Lad’, relating his memories of the fairground.

Rowland experienced and recorded the fairground scene through some of the most significant events in modern British history including the Great Depression of the 1930s and the Second World War. From the 1950s onwards, he witnessed some of the most dramatic changes in the travelling fairground including; the demise of steam power, classic rides and organ music and the advent of pop culture and white knuckle rides, which changed the fairground landscape forever. Rowland had the vision to photograph the rides and transport of the post-war period, and capture before it was lost forever. Over the course of his life, he became an authority on fairground history specially the fairgrounds around the Manchester area.