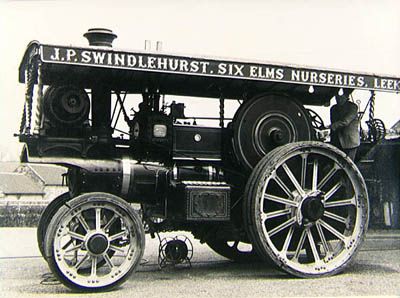 Scope: This collection contains original cabinet cards relating to Orton and Spooner of Burton upon Trent and postcards depicting fairs from the turn of the 19th century.

Administrative / biographical history: J. Philip Swindlehurst was well known in the preservation and traction engine circles. He had a keen interest and knowledge of the fairground and preservation world and was associated with the North Staffordshire and Cheshire Traction Engine Club, which he was instrumental in founding in the late 1950s.

For many years Phil and his wife Jean appeared on rallies with the Burrell's Showman's Engine ‘Rajah’, which they had restored. His restoration activities also included a 48 key Veerbeek fair organ formerly from Ryan's Yacht, a Tube Shooter built by Howcroft's in 1903 and a showman's living van.

Related Collections: Orton and Spooner Collection
Source: Donated by Mrs Jean Swindlehurst in memory of her late husband
System of arrangement: Catalogued according to type
Subjects: Fairgrounds, Fairground Rides, Fairground Art, Transport, Fairground Organs, Travelling Entertainment, Steam Preservation, Living Wagons
Conditions of access: The collection forms part of the NFA's Digital Collections which can be accessed by making an appointment to visit the reading room.
Restrictions: None
Copyright: Copies may be supplied or produced at the discretion of National Fairground Archive, subject to copyright law and condition of the material
Finding aids: Photographs available on NFA digital. Digitisation and record funded by the Pilgrim Trust