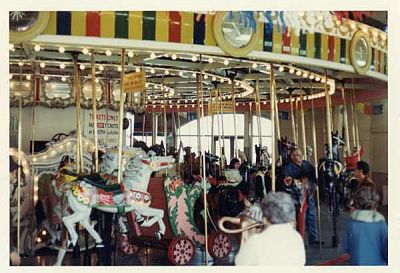 Scope: The collection contains black and white and colour prints of fairground rides and transport, mainly of British southern counties fairs and rallies in the 1960s. There are also some American amusement park images, manuscripts for the first 6 issues of 'Century of Tobers' (Fairground Association of Great Britain) magazine, a small selection of calendars produced by Carters funfair and commercially produced DVDs on the fairground and preservation movement.

Administrative / biographical history: Peter Wellen was a fairground enthusiast who photographed rides and transport around the British southern counties.

Peter was born in Maidstone, Kent, 26th April 1932. His early childhood was marked by the Second World War, experience which he reflected upon in later years on an article for the Fairground Mercury.

Once he finished grammar school he qualified as an Electronic Engineer and shortly after he completed his National Service. On his return to civil life he worked for General Electric Company on many projects for the Ministry of Defence including military planes and weapons, with most of this work being covered by the official secrets act.

In 1966 Peter moved to Silchester in Berkshire, relocating to be the General Manager at Spembly Electronics in Andover, he also worked for Plessey Electronics in Maidenhead and finally for ICL until his retirement.

Peter married Stella in July 1957 and had a daughter, Ruth and a granddaughter, Becky.

Aside the fairgrounds, Peter had many other interests such as collecting old fashioned wireless equipment, science fiction, amateur dramatics and anything to do with the theatre and he was on the board of Trustees for The Haymarket Theatre in Basingstoke. Additionally, he wrote many play scripts and contributed articles to several magazines.