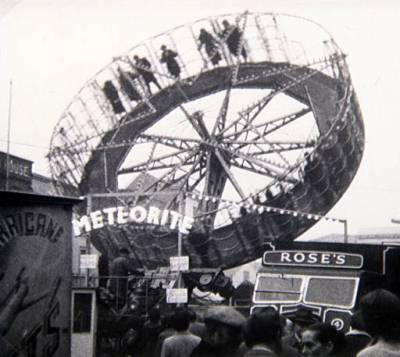 Summary: A simple concept utilising centrifugal force. The wheel has cage compartments on the circumference, and force pins the riders against this (similar to a Rotor). The axis inclines towards vertical and the riders experience the centrifugal force combined with the pull away/towards the cage through gravity as the machine rotates. For the showmen this is one of the most compact machines around.

The story of the Meteorite is made more interesting in that the ride persisted as a unique "novelty" for nearly 20 years, before manufacture (and import) of the ride began in earnest in the mid-1970s. The Meteorite always appeared to be a good idea, and a simple construction, though we are left guessing as to why it took so long to make such a deep impact on the UK fairground.

The first machine in this country was also the first machine in Europe, showmen Manson and Emde buying it for Germany before quickly selling it to Rose Brothers in 1958. Manson and Emde went on to open more Meteorite rides, whilst Rose Brothers quickly sold the UK based machine to Eddie Monte, where it enjoyed prime locations with the Pat Collins fair. The extent that this machine travelled (featuring at some time at every major fair) led some people to believe that more than one machine was around, but the fact remained that the Meteorite was a true novelty for many years. Monte sold the machine to Scottish family Grahams in 1961, where it continued to feature at many of the major fairs. In 1977, just as the manufacture of the machine in the UK began to reach epidemic proportions, it was sold to Ireland where it can still be found opening – a modern antique if there ever was such a thing.

This first Meteorite was a Hrubetz machine, and these machines would later feature heavily on the UK fairground. The Hrubetz Meteorites were 12-section machines, and the second Meteorite to arrive in the UK was another Hrubetz delivered to Blackpool Pleasure Beach in 1969. This ride was themed "Astroswirl" and has remained on site in the dome structure until 2003 when it was advertised for sale (now themed "Millennium Bug"). The ride recently passed to Southport. A third Hrubetz ride featured early in the UK, a machine imported in May 1975 from Canada by Michael Phillips.

1975 was, however, an important year for the Meteorite for another reason: Sam Ward beginning manufacture of their famous machine. Reg Gale took the prototype machine (travelled recently by Glen Miller), and this 10 section version proved a major success with Wards building a further 13 machines between 1977 and 1981.

The Wards rides gradually increased with individual theming, setting the scene for the 80s decade to be marked by both the Meteorite and the parallel developing Orbiter ride. Wards developed unique gates and fencing as well as shaped head and body rests in "diamonds and hearts" designs – giving the Meteorite an unforgettable flavour. The name of the ride began to diversify to include all aspects of outer space travel and cosmology. 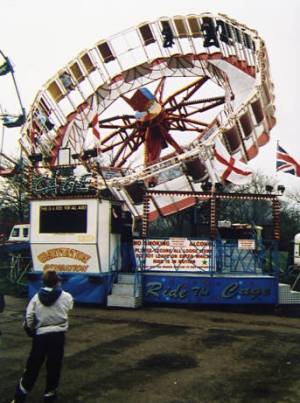 Wards main UK competitor was Cadoxton, a South Wales based enterprise that had built a few individual rides. The Cadoxton Meteorite was again a 10 piece construction, with Pat Evans taking the first example for his park at Porthcawl. Approximately 10 other Cadoxton rides were built, with many still in operation.

Bennetts also built 4 machines, these carrying the distinct Bennett handrails, and having a slightly heavier appearing centre construction (although still 10 piece). Bennetts' success obviously lay elsewhere during this time and between 1977 and 1979 the following owners took delivery of a Bennetts Meteorite: J. Greatorex, A. Manning at Margate, J. Murphy (exported in 1980), T. Smith.

The remaining Meteorites in the UK consist of imported machines alongside a few home-built efforts. Hrubetz remains the prime source of imported models, their 12 section construction being the giveaway factor. Early imports not previously mentioned include Alf Burgess in 1979, John Wall in 1980, Chipperfields at Weymouth in 1980, Hunstanton Park in 1978, S. Bailey in 1981, W. Coneley in 1978 and an early example opening on Skegness Pier under the name Mitchell (and later appearing on the "club car park" at Hull). More recent imports include Billy Joe Butlin, J. Manning, Jason Price, Michael Price and J. Crole.

Finally we cannot forget S. J. Cubbins' 1977 "Perez" import, still going strong in the Lancashire section. This makes a total of approximately 55 machines having travelled in the UK, with 50 of these machines still in operation. Not bad for something that took nearly 20 years to establish itself as something other than a novelty.

For images of fairground rides visit our collections online

Back to the top